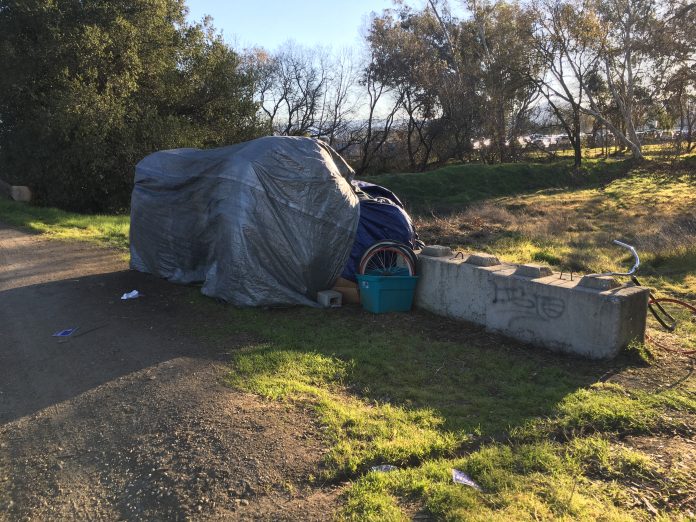 Despite pandemic fears, Santa Clara County has experienced a smaller increase in homelessness than expected, and saw a decrease in unsheltered individuals in the first homeless census in three years.

In response to the preliminary survey results released May 16, county and city of San José officials and homeless advocates are calling for more spending to keep people from falling into homelessness.

The trends in the numbers of unsheltered individuals in the county matched those among the nine counties in the Bay Area, according to a press release May 16 by All Home, a regional organization dedicated to ending homelessness and housing insecurity for people with extremely low incomes.

“Bay Area governments and nonprofits played deep defense on homelessness during the pandemic and we have more or less held the line—but now we need to go on offense and end the suffering on our streets,” said Tomiquia Moss, founder and CEO of All Home. “Programs like Roomkey and Homekey, as well as eviction moratoria and emergency rental assistance programs have changed what is possible.”

“We proved we can move quickly, invest at a new scale, and cut red tape to house and protect thousands of people, and there’s no going back—it’s time to double down on what’s working,” she said in a statement.

All Home’s Regional Action Plan estimates that reducing unsheltered homelessness in the Bay Area by 75% by 2024 would cost at least $6 billion.

Every county in the U.S. conducts a “Point-In-Time count” of unsheltered people on a single night or early morning every other year. The 2021 count was delayed to 2022 because of the pandemic. The count is based on visual observations of unsheltered individuals and groups, as well as a census of people in shelters.

Most counties released their preliminary numbers earlier this week, and more detailed information from Santa Clara County based on one-on-one surveys, including demographic data, is expected in July.

The overall number of homeless individuals counted this year increased by 3% in Santa Clara County (to 10,028) and increased by 11% (to 6,739) in the city limits of San José.

“The fact that we did not see a major increase in homelessness in the past three years really speaks to the heroic efforts of our community to protect our lowest-income and most vulnerable residents during the pandemic,” said Miguel Márquez, the county’s chief operating officer.

“Still, there are more people falling into homelessness each year and we must continue investing in permanent supportive and other housing options for all members of our community.”

“Homelessness and the human suffering it brings are perhaps the greatest challenges facing our City and our region,” said Jacky Morales-Ferrand, San Jose director of housing. “While I am heartened to see our investments begin to pay dividends with fewer people on our streets, we must do more. We must continue investing in the development of new affordable housing, and we must do everything in our power to prevent our neighbors from falling into homelessness.”

Officials said the preliminary data reflects the investments made during the past several years to blunt the pandemic’s economic fallout. Since 2020, the county reported that its supportive housing system has helped 6,890 people move from homelessness to stable housing.

In the five years since the 2016 Measure A Affordable Housing Bond was passed by voters, Santa Clara County has committed $588 million to build and renovate nearly 4,500 units in 41 housing developments across eight cities, but the pace of actual construction remains slow.

A Santa Clara County civil grand jury in January reported that six years into the initiative, the county had finished just 289 affordable units—about 6% of the goal. As of September 2021, 1,246 homes were in construction, with 1,302 still in the pipeline.

The census report blamed the continuing homeless crisis on “deep, long standing social inequities that include rising economic inequality, federal underinvestment in safety nets, and a lack of affordable housing.”

The region, according to the joint city-county announcement, “suffers from the greatest income inequality in the nation.” Two two governments also noted that “the gap between rents and income grows larger every day.” Renters in San José must now earn $54/hour ($111,680/year) to afford the average effective monthly rent for a two-bedroom apartment, according to the press release.

“We will never end homelessness in our community if we don’t address the enormous systemic factors that continue pushing vulnerable families onto the streets,” said Jennifer Loving, CEO of Destination: Home. “And by far, the greatest single factor driving this crisis is the severe lack of affordable housing options for our lowest-income residents. Our community must remain committed to scaling the production of more permanent affordable homes, and we need our federal and state policymakers to match this commitment by investing in ongoing, sustainable funding for proven housing solutions.”

In the joint statement May 16, the city and county said “The county, local cities, and community partners must continue pushing on all elements of the Community Plan to End Homelessness, from creating more permanent housing to addressing the immediate needs of unsheltered neighbors.”

– Of the 2016 Measure A Affordable Housing Bond developments in the pipeline, 11 projects (with an additional 1,280 affordable apartments) are currently under construction.

– Expand the statewide renter’s tax credit for households with extremely low incomes would help keep Californians in their homes.

– Local jurisdictions should zone and plan for sufficient interim/emergency housing to accommodate the need identified in the housing element, including for families, convert Covid response housing to permanent supportive housing and develop shallow rent subsidy programs for renter households with extremely low incomes.