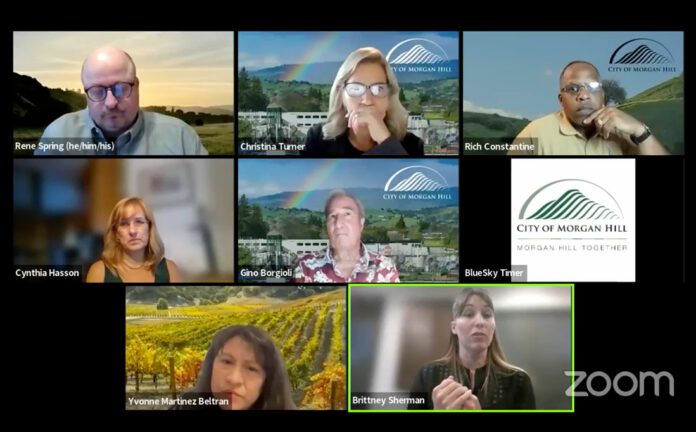 Sessions remain online only while other daises return in person

Most elected government bodies, councils and boards in the Bay Area have resumed in-person meetings as vaccination rates have climbed and Covid-19 pandemic restrictions have eased.

But the Morgan Hill City Council and Santa Clara County Board of Supervisors are among the few remaining holdouts, continuing to meet online only until officials determine it is safe to gather together with members of the public in the same chambers. Members of both bodies recently said while they would like to see their colleagues and constituents in person when conducting public business, Covid-19 is still spreading rapidly and remains a risk to the community.

“I’m quite happy we’re erring on the more conservative side,” Morgan Hill City Councilmember Gino Borgioli said. “Covid is not completely over with. I think (meeting) in person was the way to do it, and it still is the way to do it. But we have to deal with the reality of what’s out there today. We’re not over Covid.”

Each month since shortly after the pandemic began in March 2020, the Morgan Hill City Council has adopted a resolution stating that in-person meetings “would present a public health risk,” and declaring that public meetings will continue by teleconference only. The latest such resolution was passed on a 4-0 vote at the Aug. 3 council meeting, and it also applies to meetings of the city’s appointed commissions.

Other city councils and elected boards throughout the county adopted similar monthly resolutions during the pandemic, but most have returned to hosting in-person meetings—while maintaining the public’s ability to watch or participate online. Some boards of education continue to take a more cautious approach, like the Morgan Hill Unified School District Board of Trustees—which places limits on in-person participation while also allowing continued online attendance.

Other than the Morgan Hill City Council, a notable exception is the Santa Clara County Board of Supervisors, which continues to meet online only and last passed a resolution stating so on Aug. 5.

The online meetings are held on the Zoom application, and often broadcast on social media livestream platforms.

Morgan Hill officials say they are following the county’s lead in determining when to resume in-person meetings. Supervisor Mike Wasserman said County CEO Jeff Smith has recommended that the board wait until at least October to return to in-person sessions at the supervisors’ headquarters on West Hedding Street in San Jose.

Wasserman said the reasoning is straightforward: current Covid-19 variants are highly contagious, and while not as dangerous as early versions of the virus, are still capable of causing illness or death.

“I know a lot of people who have come down with the new variant,” Wasserman said.

The county’s and city’s remote meeting resolutions note that the state law AB361 allows them to continue meeting online while still complying with the Brown Act and other open meeting requirements. Signed by Gov. Gavin Newsom in September 2021, AB361 allows elected public bodies to hold teleconference meetings if they find a state of emergency exists that prohibits people from meeting safely in person.

The City of Morgan Hill’s Aug. 3 resolution states it is “consistent with the County Health Officer’s recommendation that legislative bodies continue to meet remotely to promote social distancing to reduce the risk of Covid-19 transmission.”

Morgan Hill resident Joe Baranowski has been a vocal advocate of resuming in-person council meetings. During public comment for the Aug. 3 meeting, he accused councilmembers of trying to avoid facing the public.

“You’ve become out of touch with the intention of the Brown Act,” Baranowski said on Zoom. “Open City Hall to city council meetings. It’s time.”

Local data shows that Santa Clara County is currently in the midst of another Covid surge—though not as deadly or statistically large as previous waves. As of Aug. 8, the seven-day average of new Covid-19 cases in the county is 701, according to the county’s website. That’s nearly on par with a surge that overtook county health facilities in January 2021.

Although positive cases remain high, hospitalizations and deaths due to Covid are not nearly as prevalent as they were earlier in the pandemic. Experts say this is largely due to the high rate of vaccinated people in Santa Clara County—nearly 87%, according to the latest data.

Morgan Hill City Manager Christina Turner noted that the rate of new Covid cases is likely even higher than publicized, as many people now take tests at home and do not always report positive results to health officials. She added that the size and layout of Morgan Hill’s council chambers would make it difficult to hold in-person meetings in a way that prevents the close contact that is conducive to Covid’s spread.

Morgan Hill City Councilmember Rene Spring noted that while other city councils have returned to in-person meetings, many public committees and private workplaces—including Spring’s employer in San Jose—still conduct business by teleconferencing or working at home due to the ongoing risk of Covid.

An added bonus to the widespread shift to online meetings since the pandemic began is that public participation and access have increased, according to officials. Wasserman said it’s much easier for someone who lives in southern Gilroy, for example, to attend a supervisors meeting online from their home than it is to drive to in-person meetings in San Jose in rush-hour traffic.

Online attendees at many of Morgan Hill’s meetings since early 2020 have numbered in the hundreds—vastly more than would typically attend an in-person council session before the pandemic.

Turner said when the Morgan Hill council returns to in-person sessions, they plan to do so in a “hybrid” format that continues to allow the public to participate online from any location where they have internet access.

“We are committed to transparency and openness, and we don’t feel like Zoom has impeded the transparent open government processes,” Turner said.

With over 2,000 people in attendance to watch host...
Local News

Marty Cheek has a plan to achieve global peace...