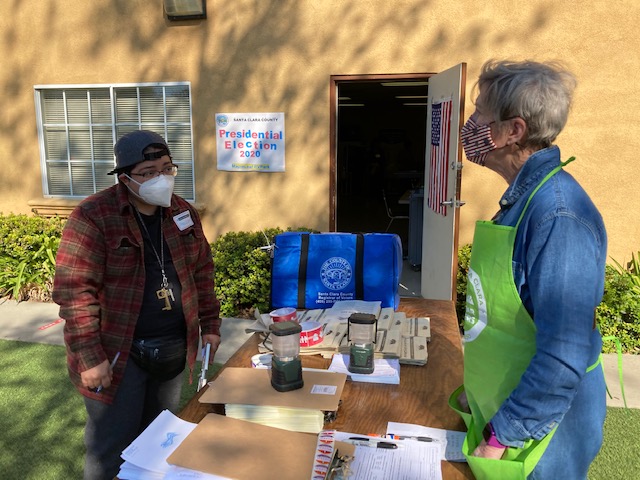 As of the morning of Nov. 4, Borgioli leads Carr by 140 ballots, or 4.05 percent of the votes counted so far, according to the Santa Clara County registrar’s website. Borgioli has received 1,403 votes to 1,263 for Carr.

Julie Raia, a family therapist and political newcomer, has received 790 votes for the District A seat.

Borgioli doesn’t think the results will change much after election officials finalize the count and certify the balloting.

“I think the citizens of Morgan Hill have spoken out,” Borgioli said.

The race for City Council District C is not as close, as incumbent Rene Spring leads with 70 percent of the votes cast as of Nov. 4. He leads against Juan Miguel Munoz-Morris, who has received 890 votes, according to election officials.

“I’m very humbled and excited that the residents of District C chose to send me back for another term,” said Spring, who is on his way to beginning his second term on the council. “These are my friends and neighbors, and I’m extremely grateful that they trust me and wanted my voice to continue to be on the council.”

Borgioli owes his presumptive victory on Nov. 3 to his active campaign style, which “consisted of a good ground game,” he said. Supporters helped him distribute flyers and spread his message around, and he blanketed social media with ads and videos discussing his positions on various subjects that have come before the council in recent months.

“I got a lot of dialogue with the citizens, so I’m pretty humbled,” Borgioli said. “Even in my previous position as a school board trustee I always listened to the people, and that’s what I am all about. I tried to tap into the community and figure out what they would like to see for Morgan Hill.”

Specifically, that includes regulating large-scale distribution centers like the new Shoe Palace building on Jarvis Drive. This subject has been brought to the forefront of council discussion with the initiative petition being circulated now by the Morgan Hill Responsible Growth Coalition.

Borgioli expressed sympathy for the MHRGC when discussing the election results, and said the council should strongly consider their proposed initiative to ban fulfillment centers in the city limits.

“What I would like to do is bring in diverse businesses that bring in jobs,” said Borgioli, who has lived in the Paradise area of Morgan Hill for 35 years. “The distribution centers are highly (automated) and they bring in very few jobs, and they are minimum wage. Jobs are the core of any city, and we have to bring them in.”

All five sitting members of the council also voiced their opposition to distribution centers at a recent meeting where the subject was on the agenda.

Borgioli added that he believes “very strongly” that he can work with the other four council members. His experience as an elected Morgan Hill Unified School District trustee from 2014-2018 reflects his experience in listening to differing viewpoints, he said.

“I’m going to rely on a lot of people to help and guide me and I’m going to try and really ramp up my knowledge as a city councilmember,” Borgioli added.

Carr was seeking his sixth four-year term on the council before Nov. 3. Having served a term on the MHUSD board before joining the council, Carr has become a fixture in South County politics.

The 2020 election was the first race in which Carr’s seat was determined in the by-district system. Before that, voters had elected their councilmembers from throughout the city in an at-large voting system.

Carr did not respond to requests for comment about the election results.

The results posted on the registrar’s website at press time are labeled “unofficial.” However, the site indicates that “100 percent” of the city’s election precincts are reporting results.

The current 140-vote margin between Borgioli and Carr is wide enough to avoid an automatic manual recount under the registrar’s policy. That policy requires a manual recount in races with a margin of victory of .25 percent or less of ballots cast, or less than 25 votes.