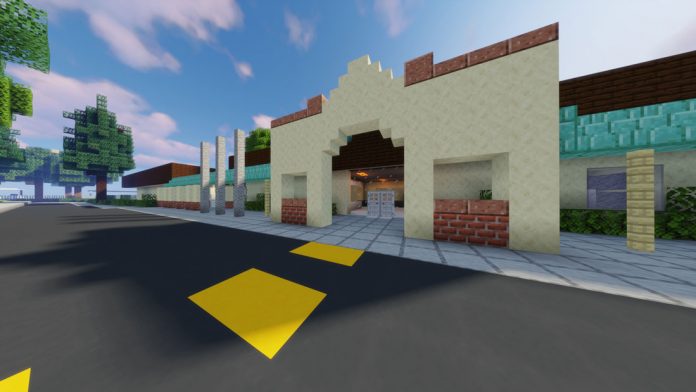 Live Oak High comes back to life in Minecraft style

Joaquin Lopez-Navarro is an avid gamer who likes to spend his free time diving into role playing games and simulators, building endless worlds with the click of a mouse.

But when the Live Oak High School senior found out early this spring that school might be closing down for a while, he took on a virtual project that was much bigger than himself.

Joaquin and a group of students recreated their campus on the popular video game Minecraft, in hopes of bringing classmates together and creating memories one last time.

“It’s something to leave behind,” he said.

Joaquin said at first it was just a joke. But the group turned the punchline into a reality after they mentioned the idea of hosting the prom, which was scheduled for May 16, and graduation in the video game.

“We can do it in our own way, be creative and make this school,” he said. “It’s sort of our own thing. That’s kind of why I did it, just to have something.”

Jugad Khajuria, also a senior at Live Oak, said the initial idea was to build the school gym within Minecraft, but they realized it looked odd as a solitary building.

He mentioned adding the surroundings, and it blew up into the idea of recreating the entire campus.

“I don’t think the rest of the team thought I was serious but I spent that night building the entire front of the school,” Jugad said. “By then I think they realized that we can do this.”

The idea came up just before the school closure but the group wasn’t thinking they wouldn’t be able to return for the rest of the school year. That meant no senior prom or graduation ceremony.

“If school closes then we can’t do all these things, but we can try to do them in Minecraft,” Joaquin said.

The project began with 10 students. Joaquin said that those who stuck around didn’t know what to do other than finish what they started.

“I was just really bored and I felt like I had a lot of time on my hands,” Jugad said. “So I might as well create Live Oak.”

Joaquin spent about 30 hours constructing the campus on his computer, while Jugad put in 20 hours of work.

“Everyone had their fair share, whether it was here or there, they put at least five hours in,” Joaquin said.

Jugad was in charge of scaling out the model, and cross referencing to Google Maps and Bing Maps. “We tried to get as much detail,” he said.

Still, they needed video of the campus. They managed to record 10 minutes of footage the day before the school closures in early March.

Joaquin said he replayed the video, looking at every detail including locker placement all the way down to the trash bins.

At first it was going to be set up as a friend group.

Joaquin said they’ve tried to invite as many classmates as possible. He wanted it to get as close as they could to an actual experience of prom and graduation.

The Minecrafters have been pushing students to join the action by spreading the word through chat rooms.

Joaquin said the closest way to recreate these events is to get everyone in the same place at the same time.

“Not necessarily recreating an actual graduation experience,” he said. “More of just this way to get together with other people and friends. Have a way to say goodbye.”

Watch a video of the virtual Live Oak High School campus created by students whose academic year was cut short by the COVID-19 public health crisis.

When the Live Oak High baseball team got swept...
Crime