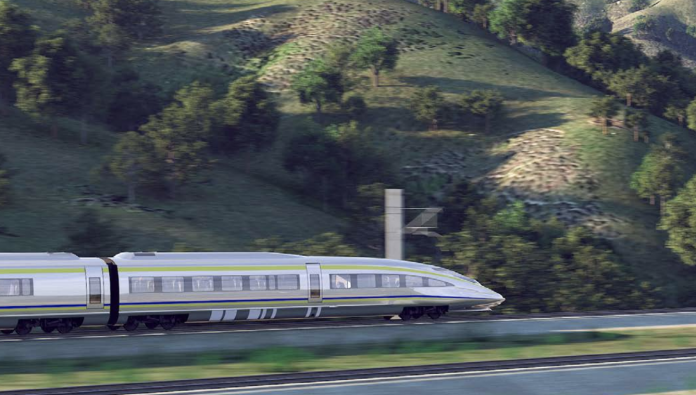 Rail plan goes ‘all in’ for Central Valley

The California High-Speed Rail Authority this month released a draft of its required biennial business plan update that dumps all of its available funds into the Central Valley.

The authority is gambling that the success of this effort to complete a Modesto to Bakersfield high-speed rail line will spur new public and private funds to enable completion of the entire San Francisco to Los Angeles route by 2033.

At the same time, the authority says it is embarking on a significant ramping up of its Central Valley line construction schedule, even as skepticism grows among legislators at the key bookends of the proposed system—the Bay Area and Los Angeles.

This latest version of the rail authority’s progress report adds more uncertainty for the portion of the high-speed rail line that would connect to the Bay Area through a Gilroy hub—which some Gilroy business leaders saw as a rare opportunity to dramatically redefine its downtown.

The updated plan, however, also offers relief for anxious Morgan Hill officials who are staring at the prospect of a high-speed rail line that could roar through the center of its downtown without stopping, gobbling up increasingly valuable rights of way in the process.

The authority said it will use this updated progress report to inform state legislators, the public and stakeholders of the project’s implementation, and to assist the Legislature in making future policy decisions about funding the project.

In a draft of the plan released last week, the authority now is proposing to use all funds currently available through 2030 to deliver an initial line between Merced and Bakersfield for passenger service before the end of the decade.

Keeping the money in the Central Valley could demonstrate the ability of the high-speed rail to attract a larger ridership increase and to achieve greater air quality improvements, according to the authority.

The plan would sink all of the state’s remaining money for high-speed rail—at least $20.5 billion through 2030—into a partial operating system that is supposed to fuel public support for more investment.

When California voters approved the rail bond in 2008, they were told the entire system would be operating this year, though the date is now projected at 2033 at the earliest. Construction in the Central Valley is at a far slower pace than needed to meet upcoming deadlines.

The authority said the latest cost estimates for the “Silicon Valley to Central Valley Line” have not changed significantly since the 2018 Business Plan.

The business plan notes that its construction rate improved, hitting average spending of $46 million per month in the fourth quarter of 2019.

Through the end of 2022, the authority plans to spend at a rate of about $70 million per month to complete the project on time.

The authority projects $20.6 to $23.4 billion in total funding available through 2030, based on optimistic returns from “Cap-and-Trade” funding—up to $750 million per year—which the Legislature approved in 2017.

Extending Cap-and-Trade funds to 2050 could allow the rail authority to borrow against future proceeds from the deal, which is a key source of money for the high-speed rail project. The authority has received a little more than $2.2 billion from the program, according to the state.

The authority’s continued optimism is based on an expectation of continued federal funding, and of new private investment to support system expansion after the successful Central Valley demonstration.

The next two years are critical for the authority, including the completion of the first federally-funded portion of the program.

The authority reported there are 350 miles of electrified high-speed rail in project development and construction in the three regions of the State.

It is using all current resources and assets to deliver the first building block of the proposed statewide high-speed rail system: 171 miles of 220 mph, electrified high-speed rail infrastructure in the Central Valley.