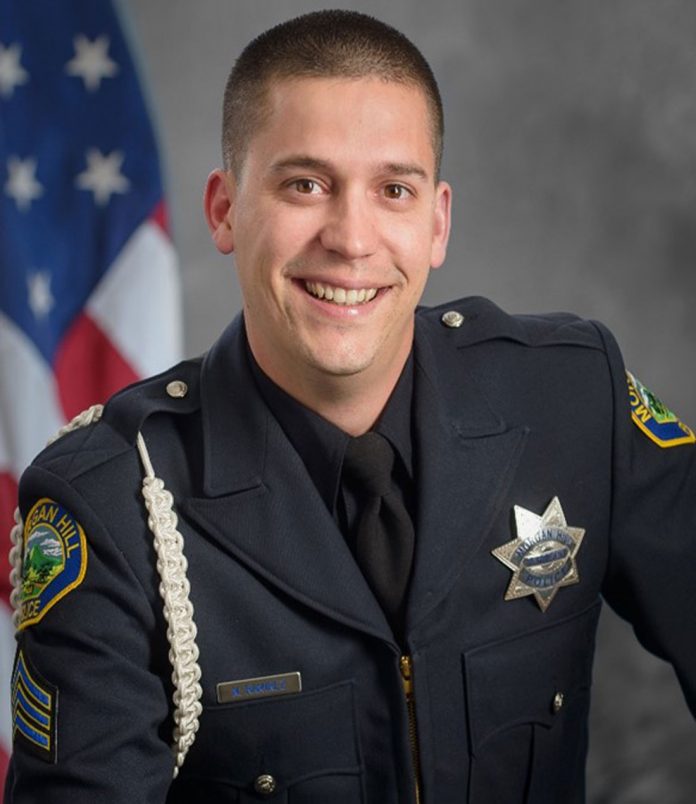 Morgan Hill Police Capt. Mario Ramirez—who has worked up the ranks within the local department during his nearly 20-year law enforcement career—was named a 2021 “40 under 40” awardee by the International Association of Chiefs of Police.

The Morgan Hill Police Department sent out an announcement about Ramirez’ recognition on Sept. 7. The annual IACP recognition honors “40 law enforcement professionals under the age of 40 from around the world who demonstrate leadership, exemplify a commitment to their profession and positively impact the communities and the field of policing,” says the press release from MHPD.

The international awardees represent “the rising leaders of policing,” regardless of their rank. “They serve their agencies and communities with excellence, whether they are civilian staff, line officers or chiefs of police,” the press release continues.

“I am truly humbled and honored to be the recipient of such an award and to be part of such a diverse group of awardees,” Ramirez said. “I accept this award on behalf of the men and women who have worked selflessly during these unprecedented times.”

Ramirez started working for MHPD as a cadet in 2002. He worked his way up the ranks, and was named one of the department’s two captains in 2020. He has a Master’s degree in law enforcement and public safety leadership from the University of San Diego, as well as California Peace Officer Standards and Training advanced and supervisory certificates, according to MHPD.

Ramirez is also a certified court expert and has served as MHPD’s defensive tactics and emergency vehicle operations instructor.

In 2020, Ramirez helped lead the city and MHPD through the pandemic as the department’s infectious disease control officer—a role in which he ensured no instances of Covid-19 occurred among Morgan Hill’s officers, the press release states. He gained these responsibilities shortly after he was promoted from sergeant to a vacant captain’s position.

Also in 2020, Ramirez served as the city’s liaison officer to fire departments during the SCU Lightning Complex fire that burned nearly 400,000 acres to the east of Morgan Hill. In this role, Ramirez helped provide “vital information to assist in the safe evacuations of hundreds of people,” the MHPD release says. “He successfully led several safety operations during civil unrest while ensuring the rights of all community members. His actions in these roles helped minimize injuries, preserve property and ensure the overall safety of first responders and community members.”

Currently, Ramirez leads MHPD’s efforts to implement the California Racial Identity Profiling Act (RIPA), with a goal to eliminate racial and identity profiling and to “understand diversity in law enforcement through training, education and outreach,” the press release continues.

“Captain Ramirez has really stepped up in these times of crisis and has put others’ needs before his own,” Palsgrove said. “I am incredibly proud of our officers and professional staff that have given so much to their profession.”