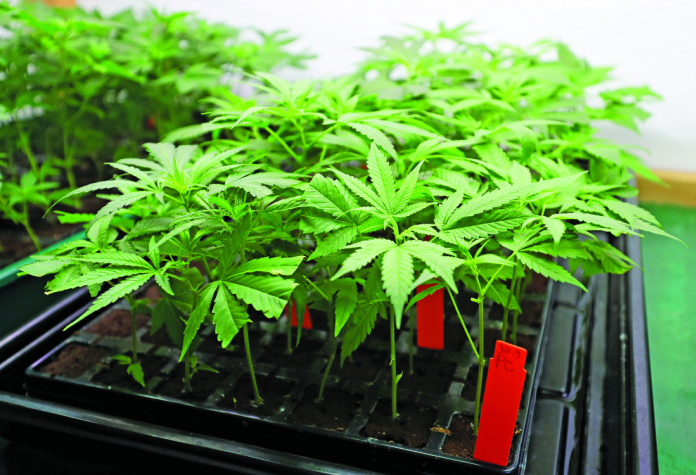 A group of local residents is almost ready to begin collecting signatures for a November election ballot measure that would legalize and regulate cannabis business in Morgan Hill.

On Jan. 24, Douglas Chloupek and an Oakland attorney filed a Notice of Intent to Circulate Petition at Morgan Hill City Hall. The petition will ask voters to support a proposed new ordinance—attached to the filed notice—that would allow up to three each of the following cannabis businesses in the city limits: retail storefronts, distribution operators, “non-volatile” manufacturing operators and testing laboratories.

The proponents will have to collect signatures from at least 10 percent of Morgan Hill’s registered voters in the coming months in order to qualify the ordinance as a Nov. 3 ballot measure.

Chloupek, a Morgan Hill resident and experienced cannabis industry professional, is chair of the Morgan Hill Voters for Public Health and Safety group, which is organizing the local cannabis legalization effort. The group includes Morgan Hill Planning Commissioner and cannabis consultant Malisha Kumar and Ryan Leary, a bail bondsman and outpatient drug treatment specialist who already has a plan in the works to open a marijuana dispensary near the police station.

The proponents said they see a clear need for safe, regulated adult use cannabis in Morgan Hill. They noted that residents have repeatedly expressed their support for legal marijuana business here, despite recent decisions by the city council that have reinforced the current prohibition of commercial cannabis.

In 2016, voters statewide approved Proposition 64, which legalized the commercial marijuana industry through the Medicinal and Adult Use Cannabis Regulation and Safety Act. In that election, voters in Morgan Hill supported Prop 64 with 58 percent in favor.

In November 2018, 79 percent of Morgan Hill’s voters approved a measure to support the taxation of cannabis business, should the city ever allow it. Under the state law, cities and counties can independently decide if they want to allow commercial cannabis business within their jurisdictions.

Thus the proponents of the potential November 2020 local measure were surprised when the Morgan Hill City Council in late 2019 voted two separate times to maintain the current local ordinance, which prohibits cannabis business. Both votes were on a 3-2 split, with Mayor Rich Constantine and Councilmember Rene Spring against an all-out prohibition.

In November 2019, the first of these council votes rejected a planning commission proposal to allow licensed, regulated and taxed cannabis business in the city limits.

“I thought our city council would vote in favor of the ordinance,” Kumar, who supported that proposal as a planning commissioner, said this week. “I understand it’s a complicated issue…but I was devastated when they said ‘no.’ I’ve been talking to the community for 2½  years, and there is a strong medical need (for cannabis) here.”

Kumar has a background in medicine and is a business owner with “a passion for helping people.” She said she knows many Morgan Hill residents who would benefit from legal medical cannabis, but find it difficult to access due to the lack of safe, local options. She aims to offer assessment and consulting services for local patients who want to know more about cannabis as medicine.

When Kumar was approached in late 2019 to join the Morgan Hill Voters for Public Health and Safety initiative, she said, “Let’s do it. Take it out of the hands of the council and let the voters make the decision for the city.”

Leary, also a Morgan Hill resident, has already hired an architect and submitted plans for a proposed dispensary in town. His business would be known as The Depot if the voters approve the cannabis business ordinance, and if his proposal meets other local planning regulations.

“I think asking the residents again, in the way of signatures and bringing it back in front of the city council, is the way to go,” Leary said of a potential November ballot measure.

Cannabis measure proponents can start collecting signatures after the city attorney assigns a title and summary to their proposed ordinance, within 15 days after Jan. 24. They will have 180 days to gather the minimum required number of signatures. After that, if the city clerk certifies the petition, the proposed ordinance will go before the city council, likely this summer. At that time, the council will be asked to approve the cannabis legalization ordinance or place it on the Nov. 3 ballot.

Chloupek and attorney James Anthony signed the Jan. 24 notice to City Hall as the proponents of the potential legalization ordinance.

Chloupek, a 42-year-old father of two, has worked in the cannabis industry in California for 11 years, as a dispensary owner, distributor, manufacturer and advocate. His current company, Juva, has multiple commercial cannabis facilities in the Bay Area.

Since the voters approved Prop 64, Chloupek has become more involved in cannabis business advocacy, and helped lead a successful 2016 San Jose referendum to open that city to more marijuana business.

“This is not the first time I have participated (with) a municipality that has gone one direction, and had to use a voter initiative or referendum to help bring that back to the will of the voters,” Chloupek said.

The City of Morgan Hill recently adopted its General...
Agriculture

In the wake of a series of powerful winter...