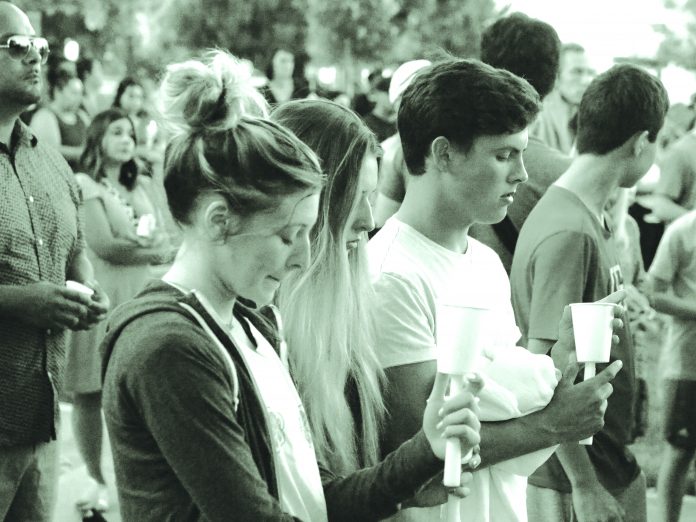 We have read about the horrific incidents around the country for years now. Locations like Columbine, Virginia Tech, Sandy Hook, Orlando, Las Vegas Strip and Parkland have been etched into our collective memory and will be henceforth associated with senseless loss of life. Never for a moment did we expect Gilroy or the Garlic Festival to join that list.

The frequency of recent mass shootings in recent years has had a numbing effect. How can we grieve a massacre a month, honor the victims and understand the motives of every deranged killer and still maintain some sense of normalcy in our lives? On a typical month in 2019, around 50 people die is mass shootings. We can be forgiven for not paying attention each time. How is this new normal in any way acceptable?

Then, suddenly, it happens. The pop-pop-pop in the background is at first surreal. It’s probably a firecracker. Next, people run or dive for cover. Initial reports are sketchy or contaminated with misinformation. The horror pierces our bubble of personal safety and the notion that it can’t happen here.

On June 23, a San Jose family of five died in a murder-suicide, one of that city’s worst tolls. Two days later, three deaths occurred at a Morgan Hill car dealership. This past weekend, a disturbed individual fired bullets at kids playing around a bouncy castle. How messed up is that?

The Gilroy Garlic Festival shooting is particularly disturbing because it was perpetrated by a member of the community. He attended local schools and came from a well-established family that was active in the region’s athletic, scholastic, business and political spheres.

We must now reclaim our civic life by not letting dark forces win. We cannot hide in our homes and disengage under the rationale that public security cannot be assured. We must give the lives of Stephen Romero, Keyla Salazar and Trevor Irby meaning by committing ourselves to doing what we can, as a community, to assure that senseless violence will not again needlessly destroy lives.

Our society clearly must invest in expanding counseling and mental health services to ensure that people who seek destructive outlets for their anger or self esteem issues can find the help they need. We will need to invest in better security for public events, including secure perimeters, increased law enforcement presence and better technologies to prevent the introduction of weapons.

A gun-free society isn’t in the cards, but Second Amendment advocates must begin to promote responsible ownership so that weapons don’t get into the wrong hands. Sensible laws that provide for background checks and waiting periods, restrict high-capacity magazines and semi-automatic rifles and raise minimum ages for ownership of certain classes of weapons should be applied in states that make it too easy to buy weapons without proper safeguards. Semi-automatic weapons are not necessary for sport or personal defense.

The United States has the dubious distinction of being the world leader in mass shootings, and 2019 is the worst year ever. We must reclaim our schools and churches, mosques and synagogues, music concerts and nightclubs, movie theaters, waffle houses and food festivals.

July 28 used to be one of my favorite...
Guest View

Religion: Pioneers in our lives

On the 24th of July, my family and others...
Guest View

Most Bibles begin with the words “In the beginning.”...