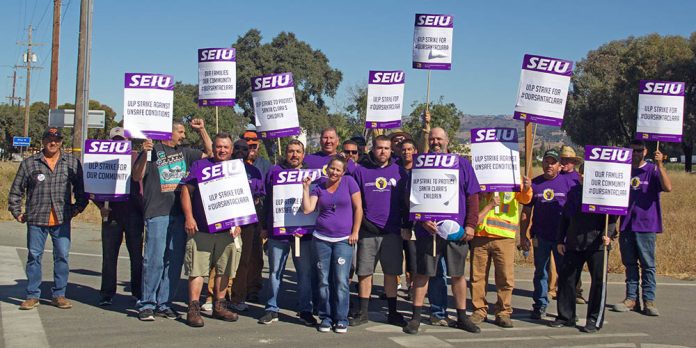 County, employees agree on contract on eve of threatened strike

Santa Clara County and its largest union representing approximately 12,000 public employees Thursday evening reached a tentative agreement on a new 39-month contract, averting a strike that had been set for Feb. 28.

In a statement 12 minutes after the 6pm agreement, the Service Employees International Union Local 521 called the agreement “historic.”

“I’m happy we have a contract,” a weary County Executive Jeff Smith said in a 6:30pm interview. Smith said the contract provides four raises of 3 percent each over 39 months for all employees covered by the contract, and also gives each represented worker a signing bonus. He said many jobs will be “realigned…to get people in the market range,” which will result in additional salary increases that will vary among workers.

Smith estimated the total cost of the wage increases as $462.7 million. The signing bonuses will cost another $20 million, Smith said.

The employees covered by the contract include 911 dispatchers, social workers, health/hospital workers and nurses, park workers, janitors, clerks and roads and maintenance workers.

The tentative agreement was reached after nearly 20 hours of tense negotiations on Wednesday, Feb. 26, and Thursday, Feb. 27, ending months of on-again, off-again talks since the contract expired last June 17.

The agreement still faces several hurdles before it can go into effect, but it is expected that the employees will ratify it, and that the county Board of Supervisors will approve it in successive meetings in March. If all goes well, the new contract will go into effect April 1, Smith said.

The union on Sunday, Feb. 23, announced its members would go on strike at midnight Friday if no agreement were reached. That would have been the first strike by Santa Clara County employees in 40 years, according to the union.

“We are extremely proud to have stood resilient and united throughout these negotiations,” said Janet Diaz, a Valley Medical Center employee and SEIU Local 521 chapter president, in a statement. “As a result, we have an agreement that will truly help us meet the needs of our families and the community we serve.”

“This agreement allows us to begin to rebuild the long-standing partnership between management and our workforce to ensure Santa Clara County can be the best place to live, work and raise our families,” said Diaz.

The dispute included a 10-day strike in October 2019 followed by voluntary mediation in November.

Earlier this week Diaz said the keys in the contract dispute were “short staffing and turnover resulting from low pay and mismanagement.”

The union president said the union had convinced the county to drop a proposal to eliminate a June 2020 raise for all employees.

“The pact includes many other improvements that will reduce employee turnover and make county jobs more attractive as the county seeks to fill critical vacancies.”

A union spokesman said details of the agreement would be released to the public following the vote by its membership.

“All along, our Santa Clara County members have maintained focus on addressing the obstacles that impact the communities they serve every day. SEIU 521 members have advocated for those they serve—and will continue to do so—from solutions to address issues that directly impact at-risk children within the Department of Family and Children’s Services, to advocating for the vital needs of foster parents, as well as urging to solve staffing shortages at county hospitals, 9-11 dispatch, and other critical departments.

“This fight was about justice for all workers. Frontline county workers of SEIU 521 demonstrated that when working people come together, we can build a brighter future for our communities, our co-workers, and our families.”

In January, the supervisors approved a similar agreement with 3,000 nurses at Santa Clara County hospitals, including St. Louise Regional Hospital in Gilroy—17 percent in total wage increases over four years.