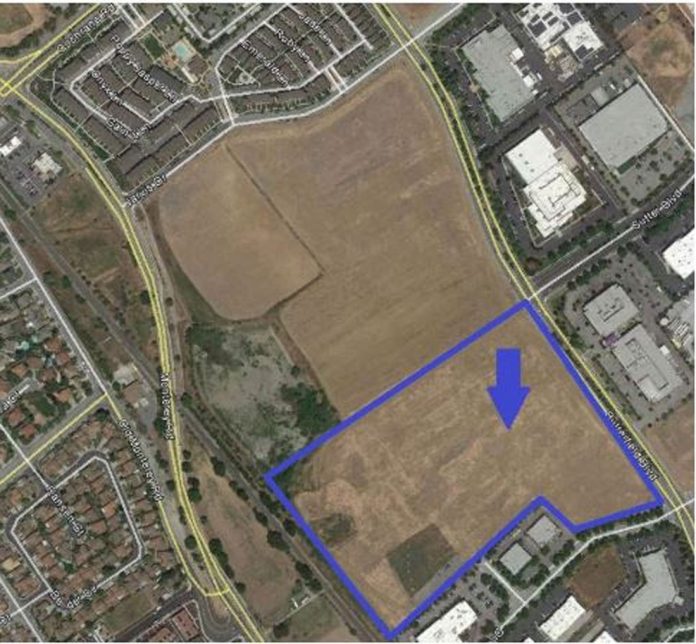 The city’s planning commission on Dec. 8 will review the plans and specifications for the proposed Butterfield Technology Park, which includes 410,000 square feet of industrial/commercial space spread across five separate buildings on a 25-acre property in north Morgan Hill.

The applicant for the Butterfield Technology Park is Trammell Crow. The industrial proposal is part of a master plan envisioned on 58 acres located between Monterey Road and Butterfield Boulevard, south of Jarvis Drive and north of Digital Drive. The master plan also includes the proposed 389-unit multi-family Morgan Hill Apartments project, a three-acre park with public access and an extension of Sutter Boulevard, reads a Nov. 27 email from city staff.

The property is currently vacant. In 2019, a previous owner who applied for a development agreement, MWest, sold their interest in the project to Braddock and Logan, who then sold a portion of the industrial property to Trammell Crow, according to city staff.

MWest’s original development agreement in 2019 approved up to 600,000 square feet of new industrial development on the property, according to city staff.

Trammell Crow has proposed about 410,000 square feet of flexible industrial/commercial space broken up into five new buildings, ranging in size from 70,000 to 92,000 square feet. The development agreement requires the proposal to go through city design review, and the city’s community development director has elevated the project to the planning commission for consideration.

Trammell Crow’s industrial proposal for the Butterfield Technology Park includes the following buildings and lot sizes, according to city staff:

All five buildings are designed to be divided for up to two tenant spaces, with maximum heights of 45.6 feet, the city’s email says.

The planning commission will consider the Butterfield Technology Park proposal at the Dec. 8 meeting, which will start at 7pm. The meeting’s agenda will be published Dec. 4.

More details about the project can be found on the city’s project page.

Trammell Crow in 2019 also proposed a separate industrial project known as Morgan Hill Technology Park on the other side of U.S. 101, near the Cochrane Road interchange. However, the developer withdrew those plans earlier this year and has not yet submitted an updated proposal.