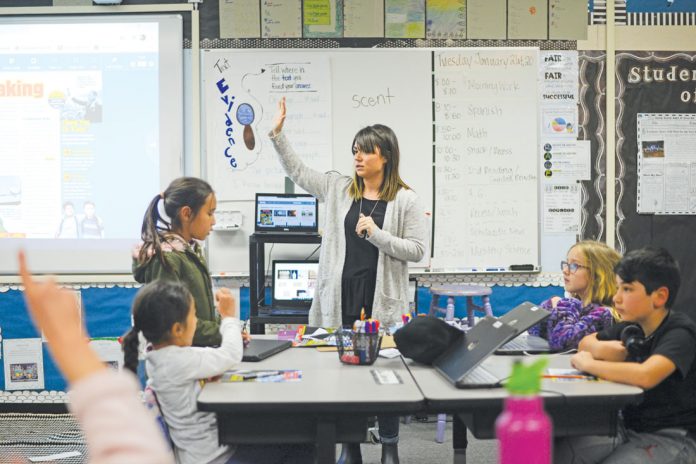 The Charter School of Morgan Hill, a K-8 independent charter school located in the outskirts of Morgan Hill, was honored as one of 21 California Distinguished Schools in Santa Clara County.

It is the only school in Morgan Hill that was honored by the state in its biennial awards for elementary and K-8 schools.

Susan Pfefferlen, principal at the Charter School of Morgan Hill, said they were thrilled to receive the award.

“We’re super proud of our staff and our community,” she said. “It’s always nice to be recognized.”

The school, located at 9530 Monterey Road near San Jose city limits, previously received the award in 2012 and in 2019. Pfefferlen said being able to apply for the award was a recognition in itself.

“A lot of discussion and reflecting goes into an application process like that because you had to choose what model we wanted to highlight about our school,” Pfeffelren said.

“Project-based learning is a huge aspect,” Pfeffelen said. “It’s a teaching method that engages students actively in learning by asking them to investigate real world questions or problems. Then they create something in response.”

According to a press release, the awards program recognizes schools across the state that demonstrate exemplary achievements based on their students’ performance and progress. The schools are also awarded for closing the achievement gap and for achieving exceptional student performance.

“These outstanding schools don’t just educate students, they also provide the young people of California the tools they need to be successful after graduation,” Thurmond said. “Thanks go to all the staff at these schools—teachers, administrators, classified employees—and parents, who are working together to provide high-quality educational experiences for all of their students.”

According to the department of education, the Distinguished Schools program recognizes schools based on performance and progress on the state indicators as specified on the California School Dashboard.

Pfefferlen said teachers at the Charter School of Morgan Hill receive training to facilitate project-based learning, which is slightly different from a traditional curriculum.

The students are involved in a collaborative setting. Pfefferlen said they work in teams when they investigate problems or questions.

“They really develop their research skills, communication skills, presentation skills, and we believe it’s helping them be ready for the real world,” Pfefferlen said.

Pfefferlen said the teaching methods are constantly changing, and the teachers are adding new projects each year.

The school sends a team of instructors to go to PBL World, a project-based learning conference held in Napa. They return with a list of ideas they share with the staff, keeping them in the loop on some of the latest updates.

Pfefferlen said part of staff development also includes a Tuning Protocol Process, when a team of grade-level teachers presents a project to the whole staff and receives critical feedback.

“It’s just kind of nice that we’ve been able to stick with our mission for all these years and that we’ve had the success that we have,” Pfefferlen said.