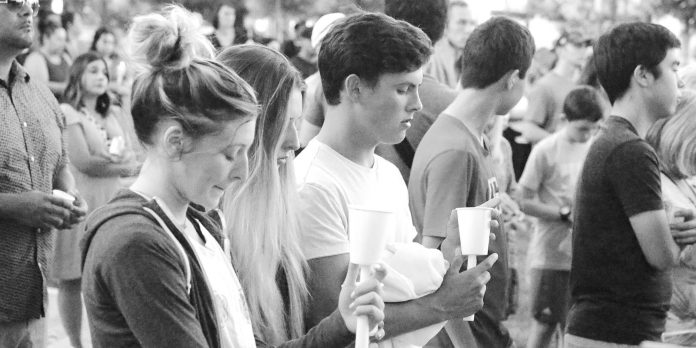 The money came in from all over the country, from customers and employees of giant companies and mom-and-pop stores, from community foundations, from fundraisers at fitness clubs and restaurants, and from thousands of individuals who gave as little as a few dollars.

Businesses and foundations made the first contributions to establish this fund with the Gilroy Foundation—the local community foundation—and they continue to lead foundation fundraising with more than $1 million in donations.

The first detailed list of their contributions provided by the Gilroy Foundation, in response to a request from this newspaper, shows the astonishing depth and breadth of the giving to victims of Gilroy’s darkest day, July 28, 2019.

The foundation report also revealed a mysterious bombshell: One anonymous donor transferred $250,000 to the fund account. Because this donor asked to remain anonymous, whether the money came from a business, individual or foundation remains unknown.

Foundations and businesses (and their customers) gave generously and without any expectation of identification or recognition. Most of the money came in in the first three weeks after that fateful Sunday evening, when a 19-year-old Gilroy man in less than a minute sprayed 39 bullets from a semi-automatic rifle into the Garlic Festival crowd, before killing himself in a shootout with three Gilroy police officers.

Six-year-old Stephen Romero and 13-year-old Keyla Salazar, both of San Jose, and Trevor Irby of Santa Cruz died of gunshot wounds. Seventeen others were shot and are in varying stages of recovery.

“The Gilroy Foundation and our community are overwhelmed with the generosity of individuals, families and businesses in their support of the Gilroy Garlic Festival Victims Relief Fund,” said Donna Pray, executive director of the foundation, in a statement earlier this month.

The 278 businesses and foundations listed in the Gilroy Foundation report gave more than $1.04 million to the victims’ relief fund.

Individuals accounted for another nearly $700,000 in gifts to aid the victims and their families, according to the foundation.

The victims’ fund was established by the Gilroy Foundation in partnership with the Silicon Valley Community Foundation, which contributed an initial $10,000 to the relief fund.

Here are some of the highlights:

Apple Inc. gave $29,264 in matching donations from its employees, and other matching programs from Google, Netflix, LinkedIn and Micron Technology added another $10,795.

The Sharks Foundation of San Jose gave $21,000, and the Ventura Christian Church and Kendra Scott Design, an Austin, Texas jewelry firm, each gave $20,000.

The foundation reported that altogether, 77 Gilroy businesses, foundations and non-profits gave more than $220,000 to the fund. In San Jose, 23 businesses and foundations gave $77,587.

In nearby Morgan Hill, 10 businesses and foundations gave nearly $13,000, including $7,000 from Marki Microwave and $5,000 from the Ford Store of Morgan Hill, where on June 25, a gunman killed two managers before killing himself. Also in Morgan Hill, George Chiala Farms gave $3,000, the Morgan Hill Chamber of Commerce gave $4,695 and the Edward Boss Prado Foundation gave $2,000.

Contributions of $5,000 each came in from the Brandenburg Family Fund of San Jose, the Starbucks Foundation in Seattle, Impact Assets of Bethesda, MD, the Santa Clara County Realtors Foundation, AssetMark Charity and Giving Fund of Concord, the Harbor Freight Communities of Calabasas, the Cedar-Sinai Medical Center of Los Angeles, and the Kirkirian Family Foundation.

Pray said that the victims’ relief fund established by the foundation handed out more than $1.5 million to victims of the July 28 mass shooting in the first two weeks of October. Lump-sum checks totaling $1.38 million were handed to the families of the three murder victims and to survivors who received gunshot wounds; the rest went to 59 others who suffered other injuries and personal trauma in the melee following the attack in Christmas Hill Park in Gilroy. The latter group received a total of about $178,000.

The lump-sum amounts varied depending on the severity of the injuries, according to the foundation, which is distributing 100 percent of donations to the victims.

Applications for aid are being accepted until Jan. 31, 2020, pending the availability of funds.

The foundation continues to accept all donations.

“They continue to pour in,” wrote Pray. ”The more donations we get, the more we can give out to the victims.”

To donate or apply for aid, visit gilroyfoundation.org.

The city council this week will formally accept a...
COVID-19

The Santa Clara Valley Transportation Authority is requesting public feedback on its 2021 Transit Service Plan, which proposes various scenarios for service changes and reductions due to the impact of the ongoing Covid-19 pandemic.
Uncategorized