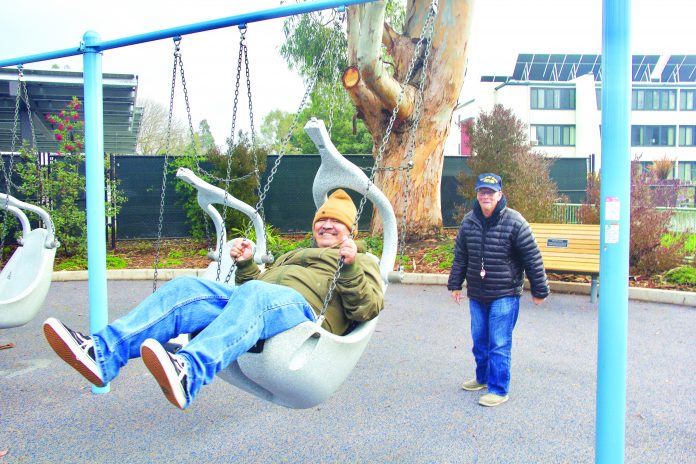 A park for everyone

Twelve years ago, Olenka Villarreal was working a tech job in Palo Alto. She was driving to San Jose once a week to take her daughter with special needs to a physical therapy center, and she was longing for a place where she could take both of her children to play worry- and money-free.

The parks in her area were compliant with the Americans with Disabilities Act, but were enclosed, small and, frankly, boring. If Villarreal was seeking a place to play with her whole family, she knew others would be, too.

Villarreal recruited her friend, Jill Asher, from her Silicon Valley public relations job to help her create a revolutionary kind of park—one where every type of body is welcome and a place where everyone can play—and Magical Bridge was born.

In 2015, Magical Bridge Palo Alto opened to the public. Now there are four parks in the works around the Bay Area, including one in Morgan Hill. The Morgan Hill park is set to break ground in June and open in 2020 to serve the South Valley.

Before Magical Bridge stepped in and Santa Clara County matched the city’s $2 million donation, the need for an inclusive park in Morgan Hill was already apparent.

Anna Gervacio frequently takes her son, who is autistic, to Morgan Hill’s parks, but knows that the older he gets, the more difficult it will be for him to play on the small structures. And then there was the time she took her son to Nordstrom Park in Morgan Hill.

Because the structure doesn’t have a gate surrounding it, Gervacio’s son was able to run across busy East Dunne Avenue in search of a bathroom. In a moment of terror, Grevacio sprinted after him, with both of their lives in danger.

These are the kind of traditional design issues that Villarreal and Asher’s park addresses. The completed park in Palo Alto has a low blue gate surrounding the park’s perimeter to prevent situations like the one Grevacio encountered. Every floor on the different play structures can be accessed with winding ramps. A patented bench sits at the bottom of the slide, allowing wheelchair-bound patrons to sit to the side while chairs are brought down to the park’s lower level.

When Grevacio heard of a small group of parents who had embarked on a mission to bring a different kind of park to Morgan Hill, she joined in. Ron and Shirlee Locicero had been working with Morgan Hill Community Services Director Chris Ghione to develop the park, and the city donated a plot of land in the Community Park on West Edmundson Avenue. The project stalled when it came to funding; such a large undertaking would require master fundraisers.

In stepped Villarreal and Asher, fresh off their success from the Palo Alto park, and the Morgan Hill project then became a Magical Bridge park. The two learned what could be repeated from the first park and what shouldn’t be; they also knew how much money it would take to build a park the size Morgan Hill had requested.

Most of the $4.2 million for Morgan Hill’s Magical Bridge was funded by the county and city, but the community worked to raise the rest. Grevacio and her husband held fundraising events along with other families and children at Morgan Hill public schools even held coin drives, raising $25,000 for the project.

Debbie Hernandez had been working on the project before Magical Bridge was brought on board. With four children, two who have special needs, Hernandez is constantly searching for activities her whole family can enjoy.

Just like the Palo Alto park, the Morgan Hill Magical Bridge park will have accommodating structures that can be used by people of all ages and abilities. “The whole thing about the park is we’re going to have neurotypical kids, special needs kids, grandpas, grandmas, uncles, aunts—they’re all going to be together,” said Hernandez.

The need for the park was one that became evident once community members got together, said Mayor Rich Constantine. Since the city will take over operation of the park following its opening, Constantine felt it would add a great amenity to Morgan Hill’s parks and recreation options.

“This is going to give members of our city and probably other communities as well a place to come so kids can come and enjoy the outdoor and open space regardless of their ability,” said Constantine.

Asher explained that is exactly what she and Villarreal had aimed for for when they first began Magical Bridge. Asher said she hopes there’s a time when the park doesn’t need to be labeled “inclusive” because all parks will be as accommodating.

“I think we’re at such a crossroads in our whole nation right now,” said Hernandez. “Parks like Magical Bridge can’t do anything but help.”

More information on Morgan Hill’s Magical Bridge park can be found at magicalbridge.org.