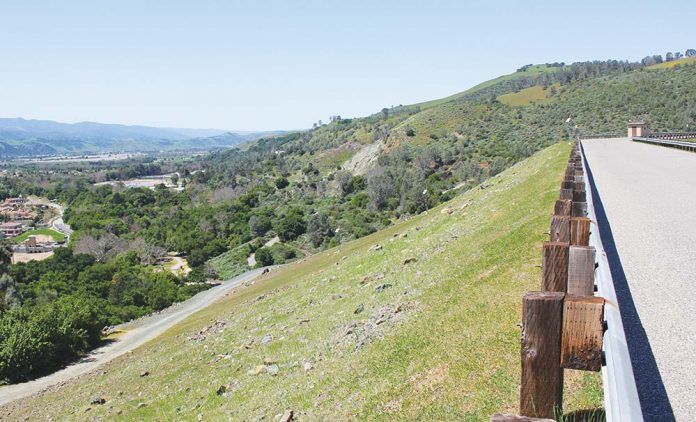 The prospect of another typical winter rainy season—the third in a row—combined with continued anxiety about the long-dormant Calaveras and Hayward faults has public water experts accelerating their efforts to improve the capacity and stability of Santa Clara County’s biggest body of water, the Anderson Reservoir.

The Santa Clara Valley Water District, which now calls itself Valley Water, says it hopes to break ground on a five-year, $550 million project to upgrade the earthquake safety of the Anderson Dam in 2021. The popular recreation lake would be drained for at least five years during the project.

New seismic data in 2018 prompted the district, which owns the reservoir, to revise and expand its plans for the Anderson Seismic Retrofit, boosting the cost and timetable for the project. The new data from the seismic study require a complete reconstruction of the nearly 70-year-old earthen dam, according to the district.

Authorities had concluded 10 years ago that the current structure could collapse in a major earthquake. Since then, several new neighborhoods have been built in the large dam’s morning shadow.

Geotechnical and cultural studies at the dam began this summer. Valley Water said this month it is moving forward on the project design for the Anderson Dam Seismic Retrofit Project.

The design work is undergoing a series of independent reviews and staff is working to complete a draft Environmental Impact Report for public review. The project is one of Valley Water’s largest capital projects to date and has been designated “a critical public safety project.”

“Valley Water is committed to ensuring the best design for maximum protection and is aiming to break ground in 2021,” according to a spokesperson.

New geologic investigations in areas around the dam had resulted in the discovery of “previously unidentified seismic deficiencies,” according to the water district report:

Even before these new findings, concerns about earthquake safety prompted the district in January 2017 to lower the reservoir’s water surface elevation limit an additional 10 feet. Anderson Reservoir is currently limited to about 52 percent of its capacity because of the seismic concerns.

“The retrofit project, which was originally planned to include large upstream and downstream buttresses, has been modified to a nearly complete replacement of Anderson Dam in place,” district staff said in the latest report. The project will return the reservoir to its original storage capacity.

The 235-foot-high earthen dam measures 1,430 feet long by 900 feet wide and sits along the Coyote Creek Fault on Coyote Road, east of Morgan Hill. The reservoir itself is situated parallel to the Calaveras Fault, which runs from Hollister to Milpitas. It holds over 90,000 acre feet of water when full, more than the other nine reservoirs in the county combined.

The more immediate threat east of Morgan Hill continues to be not the dam but Coyote Creek below it. While the reduced capacity of the reservoir will extend through 2020, the district once considered using special floating pumps to reduce flood risks by pumping the water out of the reservoir over the spillway. In February 2017, the reservoir burst over the emergency spillway after a series of torrential storms, over the banks of Coyote Creek into a South San Jose neighborhood. Those floods forced 14,000 people from their homes, leaving $100 million in damage.

The district concluded that “installing pumps on the dam or in the reservoir added risk and hazards to the operation of the dam,” and dropped the plan.

The reservoir is an important water source for treatment plants and the recharge of the groundwater basin. Besides restoring drinking water supplies, the upgrade also supports compliance with environmental regulations. The district’s regular reservoir releases ensure that downstream habitat has healthy flows and temperatures to sustain wildlife.

A breach of Anderson Dam at full capacity could have catastrophic consequences, including inundation of surrounding land more than 30 miles northwest to San Francisco Bay, and more than 40 miles southeast to Monterey Bay.

The new dam, when completed, will provide “a permanent fix to the risks identified by the seismic study,” according to Valley Water.

The Safe, Clean Water and Natural Flood Protection Program, which Santa Clara County voters approved in November 2012, will fund about $65 million of the project’s cost. The remaining costs will be funded by groundwater rates. Upon completion of the project, the average household in the area of the county roughly north of Metcalf Road in Coyote Valley can expect an increase of $6.25 per month in their water rates. Households in the area south of Metcalf Road can expect to see an increase of about $3.50 per month.

The project will require the use of heavy equipment, which may generate traffic in multiple shifts.

Residents living near Anderson Dam east of Morgan Hill can anticipate other impacts due to lighting, noise and dust.