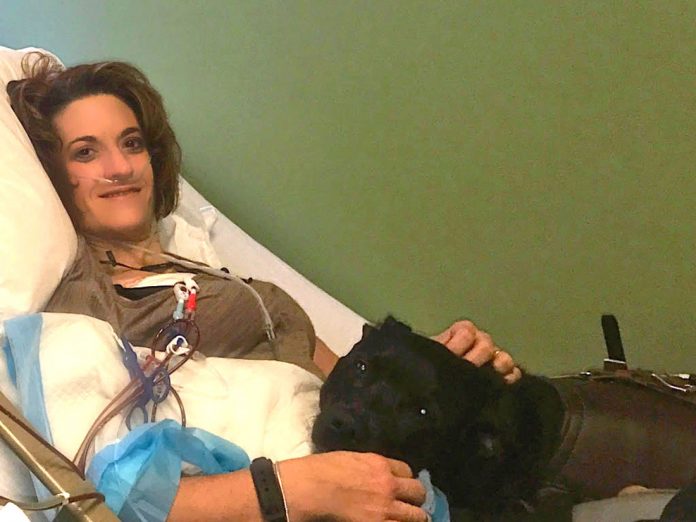 As the SCU Lightning Complex Fire raged and the evacuation warnings approached her Morgan Hill home, Deborah Vick and her family didn’t gather the usual items such as credit cards and other important documents.

Instead, they first grabbed something much more vital to Vick’s well-being: her plasma treatments and all of the necessary equipment.

Vick has myasthenia gravis, a rare, chronic neuromuscular disease that impacts her ability to control her muscles and other body functions. Nerve impulses generated by the brain are blocked by a patient’s antibodies, so muscle tissue never receives the impulses, and people with the disease display extreme muscle weakness, fatigue, problems walking and swallowing, and many exhibit breathing problems and may die. There is no cure.

Vick receives plasma infusions every two weeks, and she is not alone. There are an estimated 75,000 people diagnosed with MG in the United States, and it takes 250 donations of plasma to treat one patient for one year.

But with the Covid-19 pandemic cancelling many donation drives throughout the nation, the Myasthenia Gravis Foundation of America is reporting a severe shortage of plasma donations.

Since the pandemic began, donations have decreased by 30 percent, according to the foundation, and if the numbers don’t reverse back to normal levels, countless people who rely on plasma infusions to treat various autoimmune disorders will be facing a severe issue by the end of the year.

“The concept of not having [the treatments] is horrible to me,” Vick said. “It’s a fear for so many of us. We are dependent on it.”

The foundation is driving a campaign to encourage people to donate plasma while bringing to light how important such donations are to those with autoimmune diseases. Plasma can be donated in a way similar to blood; however, donors must go to a plasma donation center to donate their plasma, not hospitals or blood banks.

Human plasma exists in the blood, and consists primarily of water, along with various proteins and vitamins, among other things.

Plasma donors must be in good health and between 18-60 years old. Donors will have their blood drawn while the plasma is separated from it, with the red blood cells being returned to the body. The process takes about two hours, according to the Plasma Protein Therapeutics Association.

Vick, who is a member of the Myasthenia Gravis Foundation of America’s advocacy committee, is working to spread the word of the shortage and to encourage people to donate.

“This can mean life or death for a lot of people,” she said. “It’s lifesaving treatment we need. We need healthy people to go out and donate.

“It’s hard for people sometimes to understand that their healthy bodies can give life to others, and the fear that somebody like myself has of what the future will hold without the vital treatments.”

For information about donating, and to find a donation center, visit donatingplasma.org.