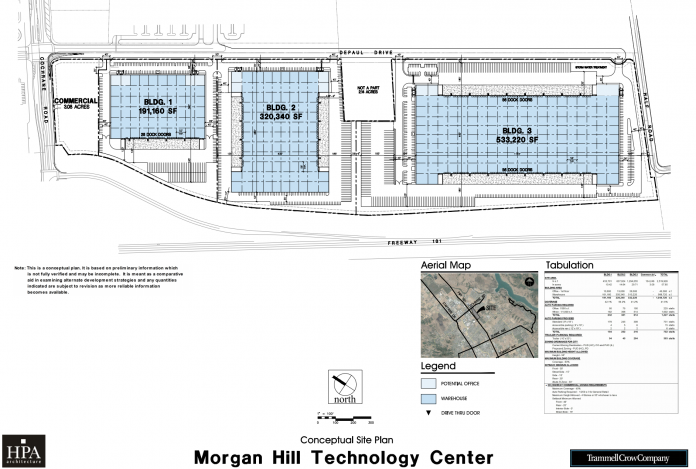 Massive industrial project in the works

It was a platform nearly every elected official in Morgan Hill ran on in the 2018 election: bring high-paying jobs to Morgan Hill.

South County planners have long sought to get commuters out of cars and working closer to home by bringing some of Silicon Valley’s tech jobs to Morgan Hill and Gilroy.

Last month, commercial developer Trammell Crow purchased more than 60 acres of Morgan Hill real estate. The land sits at Cochrane Road on the East side of US 101, near Target and the De Paul Health Center.

Trammell Crow is preparing to submit an application to amend the property’s zoning, which currently allows for commercial, administrative office and industrial use across five parcels of land. The developer proposes to rezone a majority of the land for industrial use.

Trammell Crow is a division of CBRE, the world’s largest commercial real estate services and investment firm. The Dallas-based developer currently has $9 billion worth of projects under way, according to company publications. CBRE is nearing completion of a 815,000-square-foot logistics and fulfillment center in Fremont, which it says is the Bay Area’s largest single industrial building.

Three commercial or industrial lots and one administrative or retail lot comprise the developer’s proposal in Morgan Hill, according to conceptual site plan documents provided to the Times by city staff. The total square footage of the proposed project would be 1.2 million square feet. No tenant or occupant for the property has been identified publicly.

The developer has not yet submitted a completed application for the project to the city planning office as of press time. After an application is submitted, the project will seek approval from the planning commission and city council.

The development has the opportunity to bring a major company to Morgan Hill, where the largest employer, according to the chamber of commerce, is currently the Morgan Hill Unified School District. Census data says there are only 2,645 people living and working in Morgan Hill, and 16,850 residents live here but work outside the city.

When asked, Ramirez could not make an estimate on how many jobs a site of the size proposed by Trammell Crow would bring to the city. She said without knowing who the tenant was it would be difficult to predict the number of employees.

In a memorandum from Trammell Crow to the city titled “Morgan Hill Technology Center: Statement of Project Justification,” the developer states that the project would fall in line with the city’s economic goals. “Our recent track record totals nine buildings with current occupancies / ownerships which include top information technology, green automotive and energy generation, and other companies,” a Trammell Crow representative wrote. “It is our goal to deliver attractive and flexible buildings to meet modern user requirements and scale, acknowledging the broadening of the advanced manufacturing industrial market to a wide spectrum of industries.”

The five parcels purchased by Trammell Crow were owned for two decades by Llagas LLC, a real estate investment company that shares its address with Fry’s Electronics and listed Fry’s chief financial officer, David Fry, in its 1998 filings, according to records on file with the California Secretary of State. Fry’s Electronics co-owner John Fry owns a residence and private golf course, known as The Institute course, in southeast Morgan Hill.

Santa Clara County recorded the assessed value for the five parcels at $28.5 million in 2018.

A representative for Trammell Crow said it was too early to comment on many details of the project, but the company’s Northern California Unit Principal Will Parker said in a statement to the Times, “This is an important project for us and we are looking forward to working with the city on this development and possibly future developments in the Silicon Valley area.”

Ramirez was equally optimistic. She felt the project could open up new doors for Morgan Hill and bring major industry to the city. Trammell Crow is currently the developer on the new Google campus in San Jose, which is expected to be somewhere between 6 and 8 million square feet in size.

For the city, the new project is an opportunity to stay true to campaign promises and years of economic planning. “Getting a developer of this caliber to come to Morgan Hill and bring this amount of industrial spec to Morgan Hill is very exciting. It shows that we’re a market that they believe in,” Ramirez said.