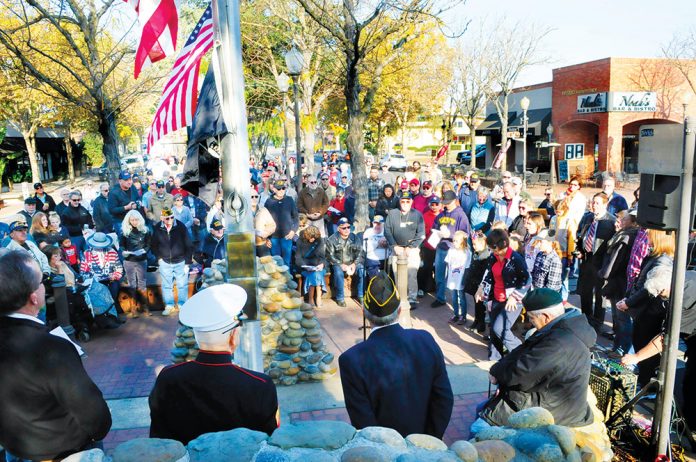 So sad, so beautiful both in the same choking breath, the photos flashed by. Runners with a veteran’s photo safety pinned to their backs. The smooth, clear plastic lamination catching the sun as they moved, alive again for a moment as light and motion animated.

The Veterans Run in Morgan Hill took place Sunday, Nov. 10. The runners—kids, teens, men and women who had just shown up for another run—looked it up online and said, “Check it out; there is a 5k and 10k in the downtown today.” Never expecting that their day and the day of those around them would be charged with such poignancy and their running thoughts would be forever changed.

An understanding: I am carrying the photo—no, I am carrying a veteran on my back. A vet who went through hell and then some is what they always say, but for some their hell was after. Returning home was not often to a place that they could understand or be understood. The expectations of family and friends that they were the same old person was quickly dashed.

Signing up at the folding table for the day of the race in downtown Morgan Hill or picking up their bib, the runners’ ball-of-the-foot bouncing energy moved to a new place. The table across the camphor-tree shaded lane, the spicy scent subtly spiking the warming air was cluttered but organized neatly with veteran after veteran’s face—some in full-dress blues, others in camo, their smiles wide, they had just signed up, or in a combat zone, proud, now sheathed in shiney plastic with perhaps just a line typed below the photo, such as “died at their own hand” or “PTSD.”

Jody said, “Who would you like to carry?” Most all of the 200 plus runners carried a vet on their back, pinned with four safety pins securely fastened. The four safety pins on the front of their running shirt secured the white tensile running bib with what they thought they had come for and was now secondary.

Twenty-two veterans a day take their own lives. Veterans of an ongoing war, a war that never stopped, a war that might pause occasionally with a breath and a brief smile but continually rages in the background. The war has ended for them now, but not for their families. When they returned and who were they?.. Occasionally glimpsing the kid long ago who could run faster than anyone out there and loved baseball with a passion beyond sanity, who got new cleats, slept with them on and ripped the sheets! That was a good one…we will be telling that story forever… Just a glimpse of that energy and joy fleeting…now gone.

Strangers now have volunteered to carry their son, daughter, husband, brother, sister, cousin, friend. The photos of the photos being carried are emailed, texted and sent via old-fashioned mail to families, reposted and reposted again. “Mom, I saw John was carried in Morgan Hill in a Veterans run!”…“Remember the sheets! Aghhh!” Briefly alive once again.

Twenty-two veterans a day take their own lives. As I think about it, in 10 days all of the runners in the run would be lost. Lost to their families and friends forever.

Reach out today and thank a veteran, reach out and save a veteran. If theirs is a war that you can’t begin to understand, try. Twenty-two is way too many. www.22toomany.com.

Lesley Miles is a Morgan Hill resident and architect, and co-owner of Weston Miles Architects in the city’s downtown.