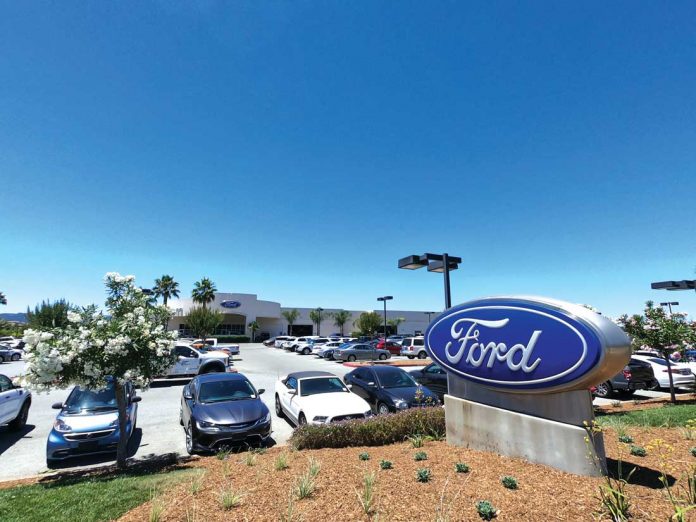 The owner of the Ford Store Morgan Hill in July secured a tax incentive deal with the City of Morgan Hill to help open a new car dealership on Condit Road.

The deal, approved by the city council July 15, the Ford Store Morgan Hill, Inc. would receive up to a maximum of $2.2 million from the city in sales tax rebates over a 20-year period after the company opens a new Chrysler, Dodge, Jeep and Ram dealership.

The site of the new dealership will be just next door to Ford Store Morgan Hill, on a vacant property where Nevada-based auto dealer Josh Towbin wanted to open a Chrysler Fiat dealership in 2017. Towbin had secured a similar tax incentive agreement with the city, but he ultimately decided not to develop the site.

The Ford Store is now in the process of purchasing the property, according to a city staff report. The Ford Store Inc. plans to invest about $15 million into the purchase and development of the site.

Ford Store President Tim Paulus said the new dealership is still “very early” in the development process, but he has received a letter of intent from Chrysler to open the new facility. He added the Ford Store is grateful for the support from the city.

City officials have been offering tax rebates to entice auto dealerships to Morgan Hill since 2002, when the council approved an “Auto Dealer Economic Development Strategy.” In fact, the Ford Store Morgan Hill was the first auto dealership to take advantage of this program in 2003. That agreement was satisfied in 2013, when the Ford Store secured another incentive deal with the city to expand its business.

In 2014, Honda of Morgan Hill opened its doors after also inking a sales tax rebate from the city. Since then, the Honda dealership on Laurel Drive “had been exceeding estimated sales targets and thus receiving rebates through 2018,” says the city staff report.

Under the agreement approved by the city council July 15, the new Chrysler, Dodge, Jeep and Ram dealership will share up to $2.2 million of “performance based sales tax revenue” with the city for 20 years, says the city staff report. That amount is the estimated cost to offset Ford Store Inc.’s impact fees, roadway and off-site improvements, mitigation, habitat conservation fees required of a new automobile agency in a greenfield location.

The new dealership facilities will be about 39,800 square feet, according to the city staff report. The project will generate about 150 new jobs, including construction jobs.

The city’s two auto dealerships are by far the most prolific generators of sales tax for Morgan Hill, which gains 1 percent of the sale price of every vehicle sold in town (without rebates). From the new Chrysler dealership, the city expects to receive at least $500,000 in sales tax revenue over the next two decades. If the business “performs at the upper range” of Chrysler dealerships in California, that number could rise to about $1.9 million.

The new investment into the Condit Road property will also increase the city’s property tax revenue by about $150,000 over the next 10 years, the city staff report says.

Additional terms of the Ford Store’s deal with the city include:

– The city shares 50 percent of the sales tax revenue collected from sales at the new Chrysler dealership, above $150,000 for the first year of operation based on total taxable sales of $15 million.

– The city shares 50 percent of the sales tax revenue collected above $175,000 for the second year of operations based on total taxable sales of $17.5 million.

– The city shares 50 percent of the sale tax revenue collected above $400,000 for each year thereafter based on total taxable sales of $40 million.

– The city makes payments twice a year. If the dealer does not exceed the baseline threshold for a year, it would not receive any payment for the year.

– In exchange for assistance, the dealer agrees to operate an automobile dealership for 20 years. In the event of default, the dealer would be required to reimburse the city per the agreement.