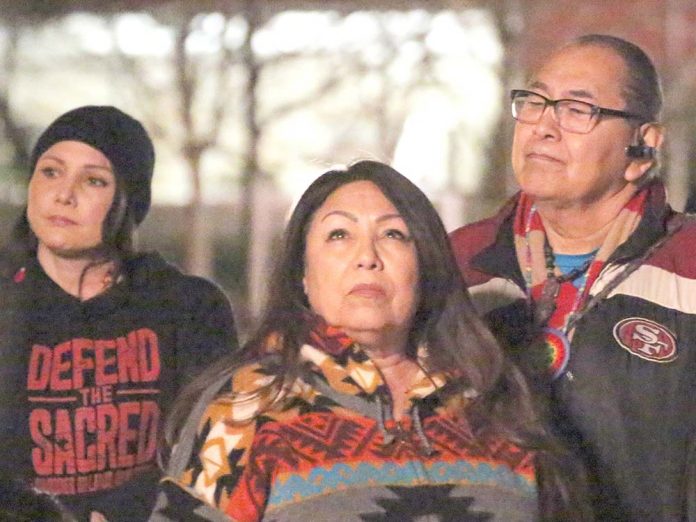 Following a demonstration outside City Hall led by area Amah Mutsun tribal members and their supporters, the Morgan Hill City Council on Jan. 15 unanimously approved a resolution urging county officials to deny a permit for a mine proposed on one of the tribe’s most significant cultural and spiritual sites.

The resolution opposes a conditional use permit for a proposed sand and gravel mining project, with processing facilities, at a 320-acre site on a portion of what is known as Sargent Ranch. The property is located in unincorporated Santa Clara County, four miles southeast of Gilroy.

The property also is a key environmental resource that allows local wildlife to travel freely across the southern Santa Clara Valley, according to the council and other opponents of the mining proposal.

Area tribe members were joined by civil rights and environmental activists outside the Morgan Hill City Hall before the council meeting started Jan. 15. The demonstrators said they fear that the development of a mining operation on the mostly undisturbed land will destroy the land’s cultural resources and spiritual integrity.

“Here in California, there are laws that allow the legal destruction of our cultural sites and our spiritual sites and our environmental sites,” Amah Mutsun Tribal Band Chairman Val Lopez told the crowd of about 80 demonstrators who attended the rally. “As long as there’s money involved, it’s legal. That’s what’s happening here. And we ask, when is that going to end? It’s time for that to end now.”

Lopez was born and raised in Morgan Hill, which was part of the vast Amah Mutsun territory before the Central Coast was settled by Europeans. Lopez thanked Morgan Hill officials for drafting the resolution supporting the Amah Mutsun ancestral site.

Although the city does not have the legal authority to approve or deny the Sargent Ranch project, the council’s voice adds to a growing list of those who want to see the land preserved as it currently exists.

The mine is proposed about four miles southeast of Gilroy by the Debt Acquisition Company of America, doing business as Sargent Ranch Management Company. The 320-acre quarry proposal is currently undergoing an Environmental Impact Report before county officials consider a conditional use permit for the project later this year. The draft EIR is expected to be released to the public in the coming months, according to county staff.

Morgan Hill City Council member Rene Spring sponsored the Jan. 15 resolution. He spoke to the crowd of demonstrators outside City Hall before the vote. He noted the preservation of the Juristac property aligns with his campaign promises to “protect our open space, our agricultural land (and) our history.”

“We have to speak up and let our county leaders know, and please have a good look at this project and say no to it,” Spring said. “Let’s protect the open space and sacred sites, and let’s just say no, no, no to this bad project.”

During the demonstration, tribe members and activists stood in front of City Hall delivering remarks and leading chants in support of Juristac’s preservation.

Tedde Simon of the American Civil Liberties Union attended the Jan. 15 rally in support of the Amah Mutsun tribe. She noted that the proposed Sargent Ranch mine follows a pattern of destruction of historical and cultural sites in California and the U.S. in favor of commercial interests.

“It’s a really ugly history of trying to erase an entire people,” Simon said. “They can’t practice their freedom of religion (and other freedoms) if the place is decimated.”

The council’s resolution also notes that the Sargent Ranch property is a vital open space region that allows local plants and animals to thrive. Numerous local and regional environmental organizations have expressed their support for saving the entirety of Sargent Ranch from development. Many of these organizations were represented at the Jan. 15 rally in Morgan Hill.

Alice Kaufman of the Committee for Green Foothills said Juristac is an important linkage for migratory mammals and birds to travel between the region’s mountain ranges. In fact, she cited the land as one of the two most important wildlife corridors—along with the Coyote Valley preserve—in the Santa Clara Valley.

“The mine would cut right across one of the most important routes” for migrating animals, Kaufman said.

A representative of the Sargent Ranch quarry project developer did not return a phone call requesting comment. The developer has previously argued that the 320-acre footprint of the mine proposal is only a small portion of Juristac, and would leave most of the surrounding land undisturbed.

For the Amah Mutsun people, Juristac is the home of a spiritual being known as Kuksui, according to a press release from the tribe and Committee for Green Foothills. For thousands of years, the Amah Mutsun lived and held sacred ceremonies on the land. These ceremonies for healing and renewal honored Kuksui with native dances, and were often attended by neighboring tribal groups.

The quarry proposal includes a 14-acre processing plant and truck hauling roads to connect the mining pits to Highway 101, according to county staff.

“We are asking the county to do the right thing and deny the permit,” said Rebeca Armendariz of South County for Protecting Juristac. “Putting a massive sand mine on sacred tribal land is desecration. We should be protecting this land, not destroying it.”

The City of Morgan Hill recently adopted its General...
Agriculture

In the wake of a series of powerful winter...