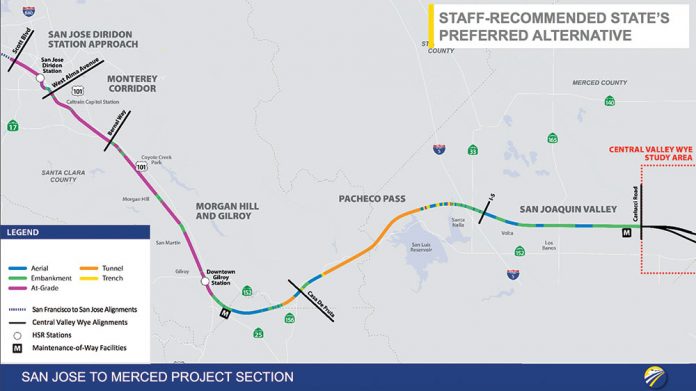 Speed bumps are returning to Morgan Hill’s primary downtown artery, but only until a new traffic signal is installed at Fourth Street and Monterey Road.

These were among more than a dozen “traffic calming” measures—together costing about $600,000—taken by the City Council Sept. 16 to improve pedestrian and cyclist safety downtown, as well as slow the flow of vehicle movement.

Elected officials remain determined to establish a “complete streets” vibe downtown that is inviting to visitors on all modes of transportation, despite the failure of an experimental two-lane Monterey Road configuration to convince the council of its permanent effectiveness earlier this year.

The council voted unanimously Sept. 16 to direct city staff to enact the following street and infrastructure improvements in and around the downtown:

• Add green bicycle “sharrow” markings to the pavement, along with signage to accommodate cycling traffic;

• Install temporary “speed cushions” on Monterey Road between Third and Fourth streets, and between Fourth and Fifth streets until a new traffic signal is installed at Fourth Street (no speed bumps will be placed where similar devices were previously located just before Third Street);

• Begin the design process for a new traffic signal at Fourth Street and Monterey Road.

In addition, the council and city staff seek to encourage developers to expand the sidewalks, and businesses to convert parking spaces along Monterey Road into “parklets” for outdoor dining or other “active use.”

The council also directed staff to explore street and signal improvements on Monterey Road between Cochrane Road and Main Avenue, and between Cochrane and Butterfield Boulevard in order to encourage more use of Butterfield, improve traffic flow and pedestrian/cyclist safety, beautify the roadway and slow down vehicles as they approach downtown.

Councilmember Rich Constantine made a motion at the Sept. 16 meeting to remove the speed cushions, but that suggestion failed for lack of a second.

From February to July, the city conducted an experiment to determine if reconfiguring Monterey Road to one lane in each direction, with buffered bicycle lanes, would sufficiently calm traffic divert motorists with no intention of stopping around the downtown. The trial generated significant debate among the public, while city staff and consultants collected data on traffic volumes, noise levels, pedestrian activity, vehicle speeds, travel times and other metrics.

But at the Aug. 5 meeting, after hearing from more than 40 residents and business owners who were divided on the trial’s effectiveness, the council voted 4-1 to keep Monterey Road in its original four-lane configuration. Mayor Pro Tem Larry Carr was opposed to that motion.

The majority at that time determined that a two-lane configuration would not reach its goals without other traffic improvements such as a viable vehicle passage around the west side of downtown.

The efforts adopted Sept. 16, and the concept of the one-lane configuration, are intended to help make downtown “the most walkable, bike-friendly, urban, family-oriented and transit-oriented neighborhood” in Morgan Hill, according to city staff.

The cost to implement the new improvements is about $600,000, according to city staff. About half the funding will come from leftover Redevelopment bond proceeds, and the rest will come from the city’s public facilities fund which is financed by developers’ fees, City Manager Steve Rymer said.

The new traffic signal at Fourth Street will take up the majority of the project cost, with a price tag of about $350,000.

A key reason for the new traffic signal is to accommodate expected vehicle traffic moving in and out of the Fourth Street Garage, which is under construction and expected to be completed in November, city staff said. The only exit and entrance for vehicles to the facility will be on Fourth Street.

City staff also recommends the new signal, as well as the existing traffic light at Second Street, should be set up with a flashing red light to act as a stop sign during times when traffic volume is low.

The Fourth Street traffic signal will likely take up to a year to design and install, city staff added. Until then, speed bumps will serve to slow vehicles.

Monterey Road is currently undergoing a “streetscape” construction project which will continue to restrict traffic until completion this fall. Some of the improvements approved Sept. 16 will be implemented after the construction is complete.