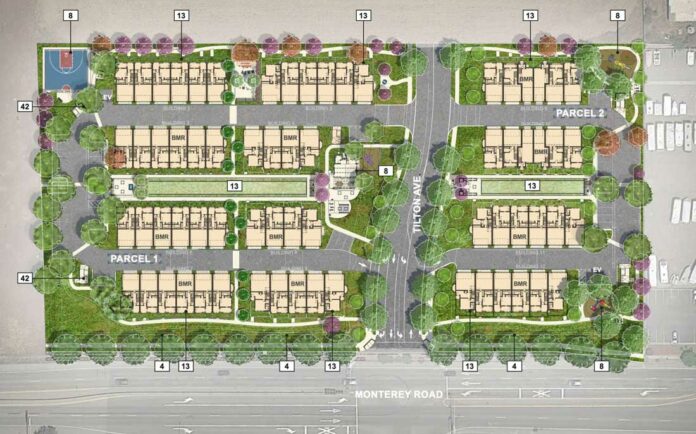 The vacant property where the development—known as Manzanita Park—is planned is on the east side of Monterey Road across from Tilton Avenue. It is the northernmost property inside the Morgan Hill city limits, according to city staff.

Plans for the residential project include a continuation of Tilton Avenue through the site. The short stretch of road will end on the eastern edge of the development, but could expand into neighboring properties if and when they become developed, according to city staff.

Tilton Avenue will be the main road serving future residents and visitors to the 67 units planned in a total of 12 three-story buildings, according to the developer’s architectural site plan.

The applicant for the project is North Corridor Investors LLC, according to a city staff report.

At the March 22 planning commission meeting, the commission voted 6-0 to approve Manzanita Park’s vesting tentative map and design permit, as well as a mitigated negative declaration for the project. Commissioner Malisha Kumar recused herself from the vote.

In response to concerns about traffic safety in the compact development, where children and families will likely spend significant time outdoors, the commission included a recommendation that the city’s engineering staff look into adding a crosswalk on the future new stretch of Tilton Avenue.

Dick Oliver, a principal of Dividend Homes and a representative of the Manzanita Park project, said the project has been in the planning stages for five years.

He said all the proposed units will have two-car garages, which should address concerns about parking that often plague new higher-density projects in Morgan Hill.

Commissioners noted that might be difficult, as many homeowners prefer to use their garages for storage rather than for vehicles.

“We’re going to have to have some way to require people to park in the garage,” Commissioner Liam Downey said.

Other project features include six different unit layouts, as well as community amenities throughout the site such as a clubhouse with a kitchen, a cabana, two picnic areas, a basketball court, passive water features, open space, gardens, park benches and trash enclosures, according to the city staff report.

Oliver added that one of the recreation areas includes an outdoor movie screen, and there are two “tot lot” play areas proposed in the project.

Fifteen percent of the units will be deed restricted for moderate-income households, city staff said.

The developer applied for the project under the state law known as SB330, the Housing Crisis Act of 2019. This law supersedes the city’s development guidelines and suspends Morgan Hill’s Residential Development Control System—which would have otherwise required the developer to compete for a more limited number of housing unit allocations each year.

SB330 also prohibits the city from requiring a Planned Development or Conditional Use Permit for the site.