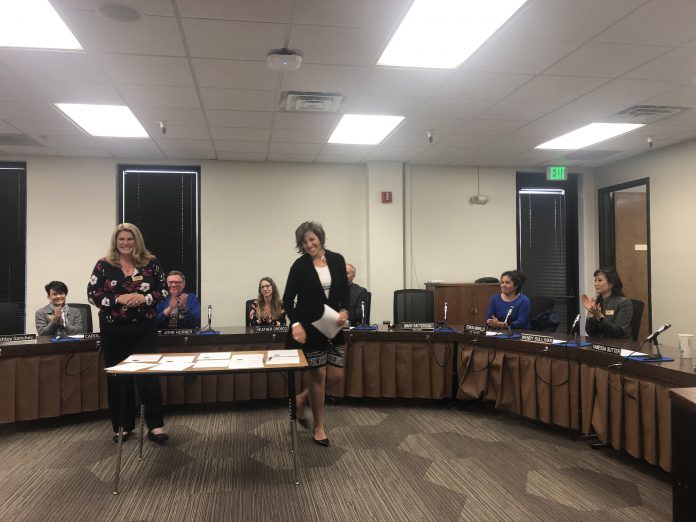 Should MHUSD broadcast its meetings?

Board, staff undecided after latest survey

Several versions of Morgan Hill Unified School District’s Board of Education have requested information from district staff over the years about the possibility of broadcasting their meetings to improve public access.

While neither the board nor district staff are sold on whether it is a necessary measure, the latest discussion on the issue came last month when staff—following board direction—offered a breakdown of what other local school districts do.

“Over time, school boards have gone back and forth over this. We think there might be a need,” said Board President Mary Patterson, noting that no action has been taken by the board to enact broadcasting of meetings. “One question leads to another in my mind.”

Eighteen of 24 responding districts said they do not broadcast board meetings, according to a survey conducted by the district that was sent out in early March.

Morgan Hill board meetings are sparsely attended, unless there is a particular issue of interest to a group of residents or students, such as the latest marching band for physical education credit. Representatives of the employees groups, district staff and some other activists routinely attend along with high school civics students (who get class credits for attending and clear out after the first hour).

It begs questions such as: Would others tune in for livestream broadcasts of meetings or watch video recordings after the fact? Do busy work or personal schedules prevent more from attending meetings that start around dinner time 6pm? (Of note: Former Trustee David Gerard’s wife used to record meetings on her smartphone and post them on YouTube at no charge to the district.)

School districts that do broadcast their meetings in one form or another (livestream, public access TV and/or recordings) are Cupertino, Los Altos, Mountain View-Whisman, Campbell, Milpitas and Palo Alto, according to the staff report.

Costs, which include purchasing recording equipment, vary depending on the option chosen by the district.

In Cupertino, where they both livestream and record meetings that are later posted on the district website, staff noted, “main cost is equipment, which likely needs to be traded out soon, but overall costs are minor.”

Los Altos also specified its costs as “minimal” with no staff hours and use of a single camera donated by its city counterparts.

Since 2014, Campbell uses a $100 per month ad-free service called Ustream “using a simple configuration with one webcam, a desktop computer running OBS and a standard microphone system.

Milpitas broadcasts its meetings live on public access TV through an independent contractor for $6,000 per year.

Los Gatos-Saratoga explained that it previously recorded meetings “but stopped a few months ago because the quality of the video and audio was so poor that it did not justify the cost of production,” according to the MHUSD report. However, its staff added they are in the process of purchasing new equipment to resume video recordings of meetings but will post afterward and not livestream.

Morgan Hill’s board plans to continue the discussion on broadcasting meetings at a future meeting.