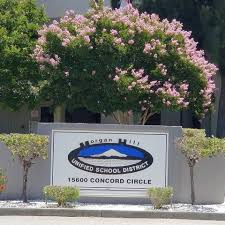 Students and staff throughout Morgan Hill Unified School District are getting ready to return to school April 12, but some parents are concerned the new in-person classroom schedules don’t give all students equal time on campus.

Most of the district’s 8,500 or so students have been in distance learning since the Covid-19 pandemic began in March 2020. In November, the district began a pilot program—which has since grown to 24 classrooms—to bring some students back to campus for in-person instruction.

Starting April 12, all 14 MHUSD schools will begin new hybrid schedules in which participating students spend portions of each day or week on campus in the classroom, and other portions at home for distance learning, according to information presented at the March 30 MHUSD board of education meeting.

Districtwide, the parents of about one-third of MHUSD’s students have opted to continue full-time distance learning, according to Assistant Superintendent for Educational Services Pilar Vazquez-Vialva. Each campus will be able to accommodate all students choosing to return to in-person instruction, with social distancing guidelines in place.

But several parents of students at Jackson Academy of Math and Music pointed out to the board that their children will not be receiving nearly the same amount of in-person instruction time that kids the same age at other schools will receive.

One of these parents, Jennifer Benson, said March 30 that JAMM’s in-person program includes only four hours in the classroom per week. By contrast, she said San Martin Gwinn’s schedule as of April 12 will place students in the classroom for 14 hours per week.

“I would like to know how these inequities are justified,” Benson said at the March 30 online board meeting.

“Children should not have less opportunities based on where they live,” added Maggie Cockayne, also a JAMM parent.

JAMM and SMG are the only two K-8 schools in MHUSD. Each school’s proposed bell schedule could not be acquired by press time, but MHUSD spokeswoman Lanae Bays said the daily schedules are still a work in progress at some sites.

MHUSD staff said the main reason for the discrepancy in schedules is a construction project has been underway at JAMM since the pandemic started, displacing teachers to new, unfamiliar classrooms. But JAMM Principal Patrick Buchser said at the March 30 meeting that the school will have the ability to phase in more hours for in-person students as the rest of the academic year proceeds, into the fall.

With campuses empty during 2020, the district took the opportunity to accelerate the construction at JAMM, which required almost every teacher to move to a different classroom, according to Superintendent Steve Betando.

Some available classrooms currently available at JAMM are not large enough to accommodate a significant number of students. Betando added that in a survey sent out to JAMM parents earlier this year, about half said the proposed bell schedule for the in-person return was “satisfactory.”

Buchser told the board March 30, “As we move forward, we hope to re-evaluate and re-survey. We will have the opportunity for increased student time on campus. My hope is to start school next year (fall 2021) in a normal fashion.”

Principals from some of the district’s other schools shared their sites’ new proposed bell schedules for the April 12 return. The schedules vary by grade level, partly due to the portion of each student body opting to return to the classroom and the length of social distance (3, 4 or 6 feet) enforced.

At Los Paseos Elementary School, students will be in the classroom for 10 hours over four days each week, plus one full day devoted to distance learning for all students. At Britton Middle School, students will spend about 13 hours per week—including time between periods—on campus, according to schedules presented at the March 30 board meeting.

At Live Oak and Sobrato high schools—where only about one-third of students opted in for in-person learning—the proposed schedule includes four full days in the classroom, plus one day at home with distance learning.

Districtwide, the parents of younger students have been more willing to send their children back to the classroom, according to MHUSD staff. About 68 percent of elementary students will return in person April 12, while only about 57 percent of middle school and 33 percent of high school students opted in.

Based on updated recommendations from state and federal public health authorities, MHUSD has reduced social distancing requirements at some grade levels for the April 12 return to school. Students from pre-school through fifth grade must be distanced at least 3 feet, chair-to-chair; sixth through eighth grade students spaced at least 4 feet apart; and high school students must remain at least 6 feet apart in the classroom.

The district is also following Centers for Disease Control and California Public Health recommendations to encourage students and parents to screen themselves for potential Covid-19 symptoms at home, before going to school. District staff is not recommending that schools conduct symptom checks on campus.

There used to be a time when Oak Grove...
News