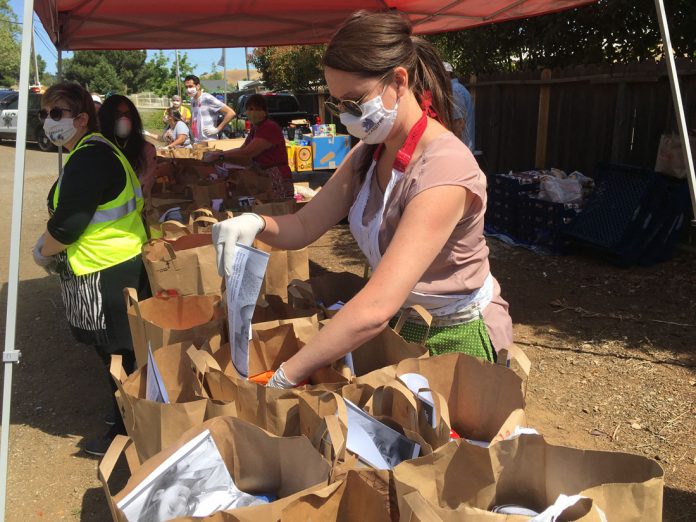 More than 150 families served at ‘Gate To Gate’ drive-thru

A local charity organization and dozens of volunteers provided groceries and cloth face masks to more than 150 families at the May 21 “Gate to Gate Giveaway.”

It was the second such giveaway at the southwest Morgan Hill home of Cecelia Ponzini since the Covid-19 pandemic forced thousands of area residents out of work.

Ponzini is the executive director of the nonprofit Edward Boss Prado Foundation. The organization’s offices and distribution center on Peebles Avenue has been closed since health officials implemented a shelter-in-place order, so Ponzini has been serving clients out of her home—with the assistance of a long list of donors, partners and volunteers.

At the May 21 Gate to Gate Giveaway—so named because it brings clients past two gates surrounding Ponzini’s home—Prado Foundation board members and volunteers operated a drive-through charity event. Numerous city officials and school district representatives were among the volunteers. Morgan Hill Police officers, including Interim Chief Shane Palsgrove, directed traffic as vehicles pulled into the drive-through and back onto the main road.

A total of 159 vehicles (including one motorcycle) drove through the smooth-running giveaway throughout the morning, Ponzini said later. Each family received a bag of non-perishable groceries, plus some produce, bread and cereal. Each family member also received a cloth face mask. Ponzini said the volunteers gave out 749 masks to the drive-through clients.

Ponzini and volunteers held a similar giveaway at her house in April. Clients of the Prado Foundation are mostly referred from other nonprofit organizations and public agencies in Morgan Hill, Gilroy and beyond.

For more information about the Prado Foundation, which runs Cecelia’s Closet and Food Pantry, visit edwardbossprado.org.

Library to open on Sundays The Morgan Hill Library will...