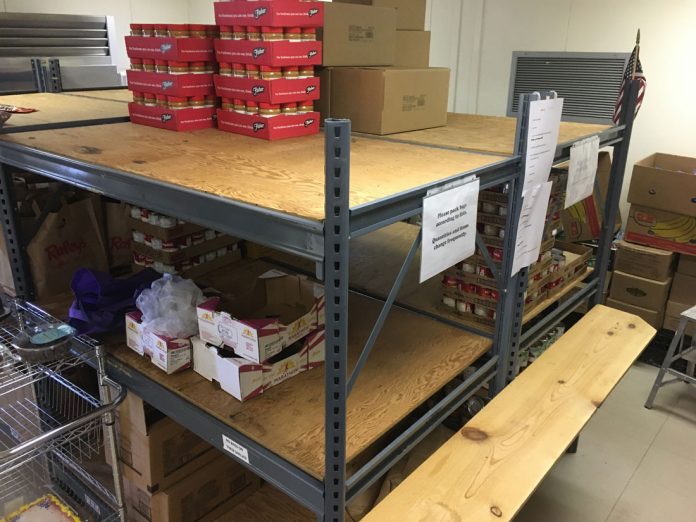 Morgan Hill resident Tim Huynh stood patiently in line outside the Reach Out Food Pantry at St. Catherine Church on Dec. 21 as he explained the circumstances that led him to start picking up groceries there about three months ago.

Huynh had never visited a food pantry before the Covid-19 pandemic started. However, his household was hit hard by the public health emergency’s resulting shelter-in-place orders. Huynh lives with his parents, who are retired, and his two adult sisters. His sisters—who work in a restaurant and a nail salon, respectively—have been out of work for months due to official limitations on these industries.

Huynh started going to the Morgan Hill food pantry twice a month about three months ago, after a co-worker advised him to do so. He described the Reach Out pantry—which is run by volunteers—as a “great spot” that helps him and his family pay their other bills without having to worry about where their next meal might come from.

Huynh and his family have a lot of company as first-time visitors to food pantries around the country since the pandemic started in March, as the effect of Covid-19 on food insecurity came swiftly.

According to state data, the number of Santa Clara County families receiving CalFresh food assistance jumped from 49,923 in March, to 60,864 in October 2020. That’s a substantial spike, considering the number of families on CalFresh from September 2019 to February 2020 held steady between 46,000 and 49,000.

In 2018, about 7.2 percent of Santa Clara County residents were food insecure, or hungry, according to data compiled by the nonprofit Feeding America.

As of earlier this month, Second Harvest Food Bank of Silicon Valley was providing food assistance to an average of 500,000 people every month—twice as many people as it served pre-pandemic. Even before the pandemic, one out of every four people in Silicon Valley was at risk of hunger.

In a study released this past spring, researchers at Northwestern University found that food insecurity doubled in April of 2020 and tripled for families with children.

In subsequent analyses, the two researchers found that the troublingly high levels held steady into the summer and that Black and Hispanic children remained much more likely to be food insecure than white kids were.

“All of it ties in together, and it all has this snowball effect on a person who maybe is kind of making it, and all of a sudden you throw in a broken car or a cancer diagnosis or something; that is the kind of thing that will throw a family on the edge completely over it,” Willis says.

Harding says the pre-pandemic economy was actually pretty good at the start of 2020, in terms of markers like unemployment. But the U.S. generally has high levels of economic inequality compared to other wealthy democratic countries, and many Californians were already in a precarious spot.

“Our economy is one that, even in the best of times, many working and middle-class families are living paycheck-to-paycheck and aren’t able to prepare for a time like this when the economy goes south,” says Harding, whose research interests include poverty, inequality, urban communities, race and the criminal justice system. “If people have to shelter-at-home and businesses are closed, it doesn’t take long before people are struggling to meet their basic material needs. And we’re seeing that.”

Reach Out, located at 17400 Peak Ave., is not one of the county’s most highly trafficked food pantries, but their daily clientele has nearly doubled from about 10 families per day, to between 15 and 25, according to volunteer Carol Lillig. Each week, about five families who have never been to a food pantry before visit Reach Out for groceries.

Many of the new clients are in industries such as landscaping, restaurants, hotels and cleaning services, Lillig said. Before the pandemic, these residents could still find work if they lost hours from their regular jobs. However, with business restrictions during the pandemic, these entire industries are all but completely shut down, leaving no alternative work or side jobs available.

“If times got tough, they would just work harder,” Lillig said. “With Covid, there’s a whole new population of the community who has never needed our services before.”

Michael Moore contributed to this report.