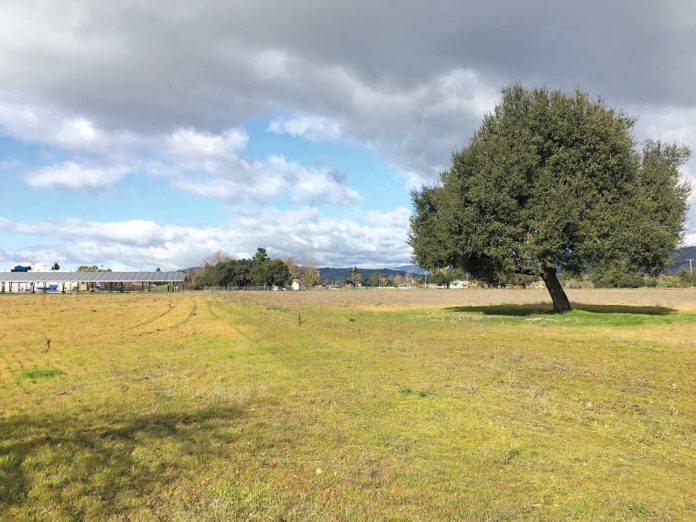 Site to be ‘land banked’ for future sports facilities

The City of Morgan Hill recently purchased a vacant property next to the Aquatics Center, increasing its inventory of “land banked” sites reserved for the future development of sports fields and facilities.

But environmentalists are concerned that the city’s intent to one day develop the former agricultural property reflects a lack of a long-term plan to preserve farmland and open space in Morgan Hill.

At the Dec. 18 Morgan Hill City Council meeting, the council unanimously approved the purchase of the 3.85-acre property on Condit Road just north of Tennant Avenue for about $1.2 million. The site is across the street from House of Thunder Harley Davidson and the Hampton Inn.

The approved purchase price was 10 percent higher than the value calculated in a recent appraisal of the property. The site is outside the city limits but within the city’s Urban Growth Boundary.

The city purchased the property from Angelo Grestoni.

The city’s parks and recreation commission voted 6-0 Dec. 17 to recommend the purchase of the property to the council.

The city used its park impact fund to finance the purchase.

The site has a state agricultural designation as “grazing land,” but has not been farmed in decades, according to city staff.

For several years, the city council has maintained a strategy to “land bank” vacant properties for the future development of sports facilities. In 2015, the city purchased a 26-acre site at the intersection of Condit Road and Tennant Avenue, adjacent to Highway 101, for future baseball and softball fields. The agricultural property is still being actively farmed.

The city’s Bikeways, Trails, Parks and Recreation Master Plan calls for expanded sports facilities within the city that can serve local residents and support regional events and sports tourism. The city’s Economic Blueprint identifies sports tourism as one of its components, notes the staff report. City officials are also considering land for sand volleyball facilities.

The property purchase prompted the Santa Clara Valley Open Space Authority and Committee for Green Foothills to send letters of concern regarding the conversion of the lands from agricultural uses.

“The city’s continued efforts to acquire land within its Priority Agricultural Conservation Area for non-agricultural purposes sends conflicting messages to landowners and regional entities as to where the city’s priorities lie, making it challenging to coordinate on how to ensure the long-term viability of agriculture in the region,” reads a Dec. 18 letter from the Open Space Authority to the city council.

A letter from the Committee for Green Foothills encourages the city to work with regional partners—including the county, open space authority and LAFCO—on a long-term plan to preserve agricultural lands while also promoting new sports fields.

However, the city’s Dec. 18 purchase “raises many questions,” the Committee for Green Foothills letter says. The purchase “reinforces the city’s intent to eventually develop lands within this area with urban uses,” the letter states.