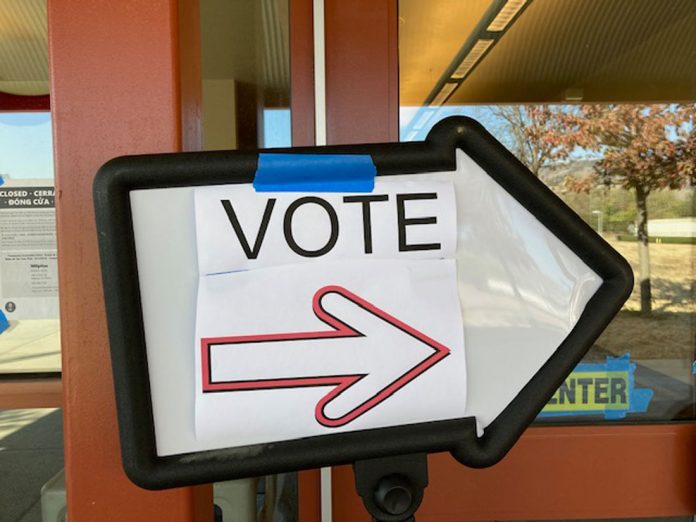 Balloting closed at 8pm June 7 in the state primary election that included numerous Santa Clara County races. The county’s registrar of voters is still counting ballots cast here. As of 10am June 8, elections officials had counted about 52% of local ballots.

In the race for Supervisor District 1, San Jose City Councilmember Sylvia Arenas leads the field with about 28.7% or 10,196 votes, according to the registrar’s website. Khamis, a former San Jose City Councilmember, had received 9,375 or 26.4% of votes cast as of the morning of June 8. Following Khamis in the vote tally so far is Morgan Hill Mayor Rich Constantine with 20.5%, Santa Clara County Board of Education Trustee Claudia Rossi with 19% and Denelle Fedor with 5.5%.

The top two vote-getters after all the ballots are counted will advance to a runoff in the Nov. 8 general election. A candidate could avoid a runoff by receiving more than 50% of the vote, but that doesn’t appear likely in the District 1 race.

Supervisor District 1 includes all of South County’s unincorporated areas surrounding Morgan Hill and Gilroy, as well as portions of San Jose. Khamis has been campaigning for the seat since last year, and even moved with his family to a South San Jose neighborhood to remain eligible after the board of supervisors redrew district lines in 2021.

Shortly after the first wave of vote tallies were posted on Election Night June 7, Khamis addressed his supporters at a party he hosted at the Los Paseos Event Center.

“(We) did a lot of work. This campaign was about hard work and making new friends. I am blessed to have so much support,” Khamis said.

If their totals hold up, the two will face each other in November. As of 10am June 8, about 52% of the ballots had been counted, with the expected turnout of approximately 32% of the county’s one million registered voters.

The two law enforcement veterans led two sheriff’s deputies in a reform-minded campaign that coincides with the pending civil misconduct trial of current Sheriff Laurie Smith, who chose not to seek re-election to a seventh term after votes of no confidence, a scathing grand jury report and a pending trial that could remove her from office before her term ends.

This is Jensen’s second attempt at the sheriff’s post. He ran against his former boss, Smith, in 2014 and lost.

Sheriff’s Sgt. Christine Nagaye had 18.75% of the reported early unofficial returns, and fellow Sgt. Sean Allen had amassed 12.7% of the vote.

Santa Clara District Attorney Jeff Rosen turned away two challengers—his first since he defeated his own boss in 2010—on June 7 and appeared headed to an easy election victory, avoiding a November runoff.

If Rosen’s totals hold above 50% he will be declared the winner. He was unopposed in his previous two re-election bids.

In his primary campaign, Rosen fended off criticism from an office insider, Chung, and a courtroom opponent, Khan.

Chung said Rosen was too progressive. Khan criticized Rosen for not being progressive enough.

In February 2021, Chung, then an assistant district attorney, wrote an op-ed in the San Jose Mercury News criticizing “progressive” prosecutors for criminal justice reforms that would change classifications for some robberies and reduce jail time.

Although he didn’t directly criticize his boss, Chung was demoted two days after his public outspokenness. When he reportedly refused a severance package to resign, he was terminated. In September, Chung filed a federal lawsuit against Rosen, claiming he and the county violated his constitutional right to free speech. The lawsuit is pending.

Khan is a deputy Santa Clara public defender who announced his candidacy in July 2021, and since then has consistently and aggressively pressed progressive attacks on Rosen’s prosecutor methods, his alleged coverups of police violence and disregard for suspects’ rights.

The criticism didn’t appear to phase the district attorney, who reportedly had been on Gov. Gavin Newsom’s short list to be appointed attorney general, which eventually went to Rob Bonta.